The sustained and ongoing improvements in vehicle miles since the summer of 2009, along with a record-high volume for the month of September, indicate that the U.S. economy is recovering gradually, and the chances of a double-dip recession are negligible.

The chart below shows the traffic trend.  (See also Calculated Risk for a less optimistic take on this trend.) 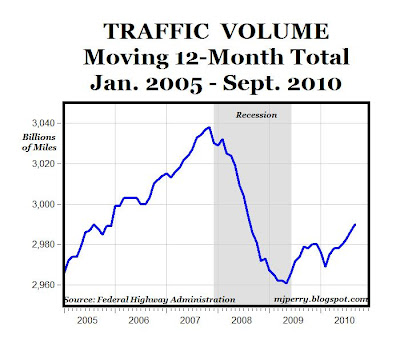 In related news, according to IPO Home, Swift Transportation Company, the “largest truckload carrier in North America” recently increased the size of its proposed IPO.