Count this in the random observation file.  While reading through some recent posts at Insider Monkey we noticed that two prominent hedge fund managers, Monish Pabrai and Richard Perry, both hold Brookfield Infrastructure Partners (BIP) in their ten ten holdings.  Coincidentally for both managers it is their third largest holding.  Pabrai also holds Brookfield Asset Management (BAM) which is affiliated with Brookfield Infrastructure.

What does Brookfied Infrastructure Partners, LP do exactly?  From the company’s website:

Our current business consists of the ownership and operation of premier utilities, transport and energy, and timber assets in North and South America, Australasia, and Europe. Brookfield Infrastructure also seeks acquisition opportunities in other infrastructure sectors with similar attributes.

The company released 4Q 2010 earnings last week, which presumably accounts for the pop in the stock.  The other thing the company has going for it, similar in nature to the MLP sector, is yield.  A look at the most recent investor presentation shows the most recent quarterly distribution of $0.31 per unit which works out to a pro forma 5.48% annual yield ($1.24/$22.63).  Something much sought after by yield investors in this market.

How has the stock done the past year?  Pretty good.  The stock, or units*, had a nice run into the end of 2010 and have been consolidating of late near its 52-week high. 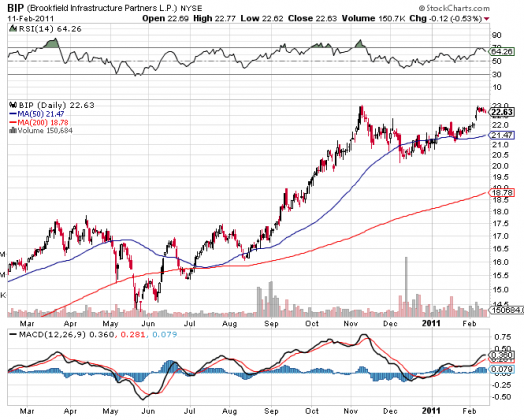 Infrastructure was a hot theme prior to the financial crisis.  Like every other sector the company specifics matter more than the actual overarching theme.  Over at SumZero, there recently was a write-up on Macquarie Infrastructure Company (MIC) which touches on both infrastructure and yield.  In the case of Macquarie the story seems to rest on the possibility of a dividend reinstatement.

What’s it all add up to? Not sure. However when two smart guys both make a stock a part of their portfolios it just might make sense to take a longer look.

*No position in BIP, BAM or MIC.  Please note that BIP is a limited partnership with the tax complications therein.