Tim Duy, “In short, the tech bubble was a wild ride, but I am wary about declaring it an absolute failure of the capital allocation process.”  (Economist’s View) 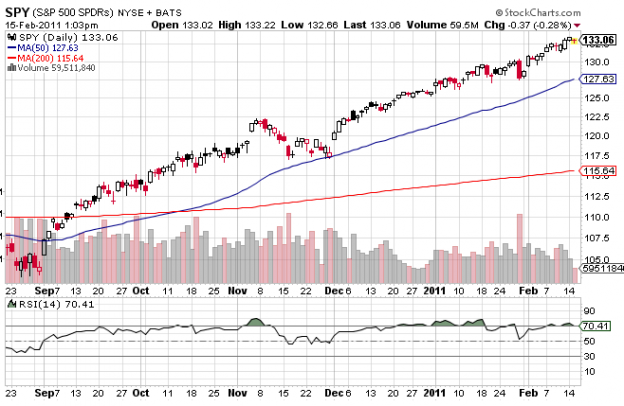 The S&P 500 has been above its 50-day moving average since September 2, 2010.  (Crossing Wall Street also Quantifiable Edges)

Sentiment measures are levels seen prior to a correction.  (Mark Hulbert)

Is the commodity rally overblown?  (Bespoke)

A great illustration of how volatility can generate opportunity.  (Bigger Capital)

Corporate America has yet to “pile in.”  (Howard Lindzon)

On the stop-loss myth.  (Falkenblog)

Having fun with compounding.  (Bespoke)

Zynga is reportedly worth more than Electronic Arts (EA).  (TechCrunch)

Now that’s what I call a blank cheque!  (FT Alphaville)

A hedge fund manager who actually tells it like it is is a rarity.  (Dealbreaker)

Speaking of John Paulson, what did he buy and sell in Q4?  (Clusterstock)

Is China cooking the books on inflation?  (FT Alphaville, Economist)

China’s economy may already bigger than we think.  (Gavyn Davies)

Russia is embracing the Arctic in its search for oil.  (NYTimes)

Is America set to freak out about inflation?  (Money Game)

The TIPS market seems to do a better job.  (Minyanville)

Is the long decline in apparel prices coming to an end?  (Global Macro Monitor also NYTimes)

Time to do your homework on Internet 2.0 because the market will at some point weed out the losers. (AR Screencast)

A discussion about art as an investable asset class.  (Felix Salmon)

For those of you who just can’t get enough Apple (AAPL) talk, there is a podcast network for you.  (Apple 2.0)