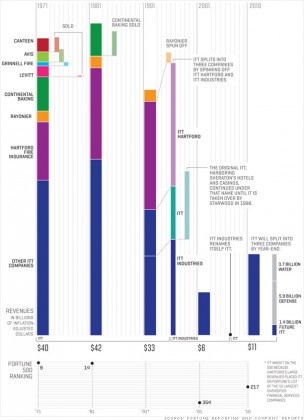 A cool graphic on the dismantling of Harold Geneen’s ITT.  (Fortune)

Where have all the bulls gone?  (Bespoke)

The market has already voted for a double-dip.  (Money Game)

How the media affects our perception of the markets.  (Bigger Capital)

Richard Bernstein is in the China bubble camp.  (Marketwatch via TRB)

Thinking about the cause of adverse market timing.  (Vanguard Blog)

Do you need to take a break from Twitter?  (Tyler’s Trading)

Active commodity investors need to make sure they are not paying alpha fees for beta exposure.  (Pension Pulse)

We would need to see a lot more IPOs to get to frothy levels.  (Phil Pearlman)

Taking a crack at a valuation of LinkedIn.  (Musings on Markets)

John Carney, “Diversity really is strength in financial systems, just as it is in ecological systems.”  (NetNet)

Why is Citigroup (C) paying up to keep Vikram Pandit?  (Street Sweep)

AIG (AIG) is apparently reaching for yield these days.  (Bloomberg)

On the paradox of running a publicly traded asset manager.  (Breakingviews)

What is a ‘death derivative‘?  (Atlantic Business, Aleph Blog)

What the market thinks about the relative risk of emerging markets and the G7.  (Felix Salmon)

Electricity shortages could put a real damper on Asian economic growth this summer.  (Confessions of a Macro Contrarian)

Not so hot numbers from the Philly Fed.  (Real Time Economics)

No matter your thoughts on financial regulation having no one in leadership roles is an issue.  (ProPublica via Big Picture)

What is “financial repression” and is it even feasible as policy?  (Gavyn Davies)

Are network effects online all that strong?  (SAI)

Why education is important:  it gives you choices.  (Time)

Americans are increasingly waiting to get married.  (Bloomberg)