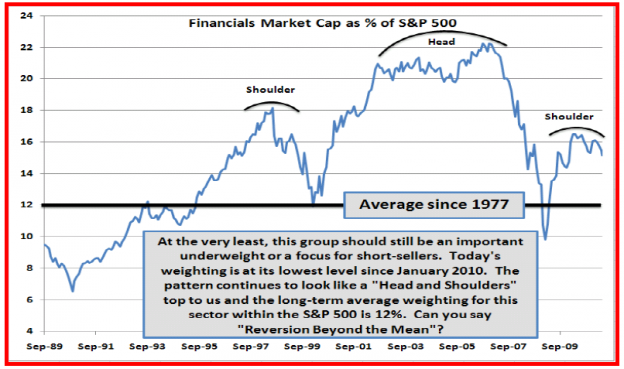 Financial market cap as a percentage of the S&P 500.  (John Rogue via Big Picture)

Equities vs. credit and the M&A cycle.  (Pragmatic Capitalism)

P/Es matter even for hot IPOs like LinkedIn.  (ValuePlays)

Why some people still like to play stocks in bankruptcy.  (Businessweek)

Maybe this is why analysts don’t issue sell ratings.  They rarely work out.  (Bloomberg)

Post-Whitney there still are opportunities at the long end of the muni curve.  (Big Picture)

Did the Build America Bonds program work, and if so why won’t it be renewed?  (FT Alphaville)

Meredith Whitney should have learned you can predict price (or in this case defaults), or time, but not both.  (Bloomberg also Big Picture)

What Peter Thiel is up to these days.  (Dealbook)

Is the value effect a compensation for risk?  (SSRN via CXOAG)

The valuation case for Cisco (CSCO).  (The Tech Trade)

Domino’s Pizza (DPZ) seems to have pulled off a turnaround.  (Daily Ticker)

You do not want to be a hedge fund manager on the wrong side of insider trading charges these days.  (NYTimes)

Hedge funds that also allow for separate accounts don’t give up anything performance-wise.  (All About Alpha)

Josh Brown, “(T)he IPO window has not only opened – investors have just tossed a trash can through it.”  (The Reformed Broker also GigaOM)

Russia’s Yandex is the next hot IPO coming to market.  (Reuters, Businessweek)

What LinkedIn means for the private markets.  (Street Sweep)

LinkedIn is a real company, but no one really knows what it is worth.  (SAI)

Spanish yield spreads are back on the rise.  (MarketBeat)

Germany vs. China:  compare and contrast their economies.  (Money Game)

A look at CRB vs. CPI.  (Dragonfly Capital)

The US Treasury has been extending its debt maturity profile for some time now.  (FT)

Want to goose the economy?  Fix the tax system.  (macroblog)

ARTV with Jeff Miller of A Dash of Insight.  (Abnormal Returns)

eBooks are not perfect, but they don’t need to be to supplant print.  (Megan McArdle)

No wonder college is so expensive.  It now takes most graduates more than four years to graduate.  (Economix)

What is hindsight bias?  (Farnam Street)

Contrary to popular belief it only takes 50 baseball games to sort the winners from the losers.  (WSJ)