David Kocieniewski, “Video game developers receive such a rich assortment of incentives that even oil companies have questioned why the government should subsidize such a mature and profitable industry whose main contribution is to create amusing and sometimes antisocial entertainment.”  (NYTimes) 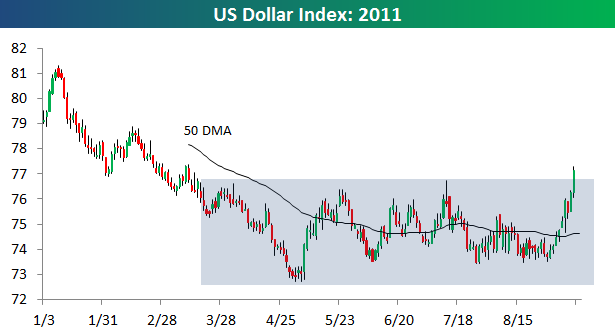 The US Dollar Index is breaking out of its range.  (Bespoke)

What are the implications of a stronger US dollar?  (Market Anthropology)

The S&P 500 and the Euro have been trading together of late.  (StockCharts also Afraid to Trade, Climateer Investing)

The past decade has been dominated by macro forces.  How to cope.  (WSJ)

Analysts do a poor job of estimating earnings at turning points in the economy.  (WashingtonPost)

Chess, “As traders we have to continually adjust appropriately to the moving target known as the market.”  (chessNwine)

Why some of Apple’s ($AAPL) advantages cannot be copied by other companies.  (Daring Fireball)

When does the board need to take some responsibility for the mess that is Yahoo! ($YHOO)?  (The Reformed Broker)

If you don’t know Hadoop you should.  (Businessweek)

Great companies have a unique “voice.”  (A VC)

Conflicts of interest are rife in investment banking.  (Deal Journal)

Who are the real 50 most influential people in finance?  (Big Picture)

A reintroduction of Glass-Steagall would save banking, not kill it.  (Telegraph)

The risk from an implosion in Europe is incalculable.  (Pragmatic Capitalism also Free exchange)

Rumblings in Europe as talk of a Greek default escalates.  (Global Macro Monitor)

It looks more likely that the Euro will lose a member or two.  (Credit Writedowns)

On the black box that is the Chinese economy.  (Pragmatic Capitalism)

Economic statistics are once again surprising on the upside.  (Money Game, ibid)

How to make business want to invest again.  (NYTimes)

The economy is facing structural issues that cyclical policies are only making worse.  (Global Macro Monitor)

How Greg Harmon gets the most out of StockTwits.  (Dragonfly Capital)

StockTwits is sponsoring Tuesday’s Children to mark the anniversary of 9/11.  (StockTwits)