Josh Brown, “The [stock] market, which once existed primarily for capital formation, has become little more than a mock-capitalist game aimed toward enriching only the participants, contributing little to the rest of the nation.”  (The Reformed Broker) 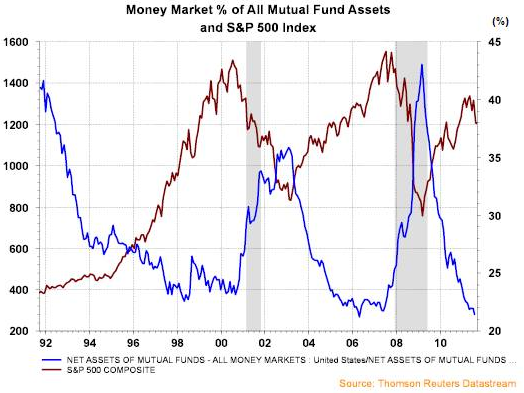 Where’s all the cash?  (Horan Capital)

The percent of stocks above their 200 (and 50) day moving averages.  (Fireside Charts, ibid)

Utilities have been the market leaders since August.  (StockCharts Blog)

Another look at the Coppock Curve.  (MarketBeat)

Check out the spread the 10 year Treasury yield and 30 year mortgage rates.  (Bespoke)

The Permanent Portfolio is hot these days.  (Bloomberg)

The equity markets love the day before a FOMC meeting.  (FRBNY via HistorySquared)

A transcript of the much talked about Ray Dalio talk.  (Thinking in systems)

Missed this earlier.  TrimTabs is going to run an ETF based in part on float shrinkage.  (Barron’s)

What the demise of Goldman Sachs’ ($GS) Global Alpha fund tells us about the markets.  (CSS Analytics)

Felix Salmon, “In general, fund of funds are sold, not bought.”  (Reuters)

Are we worried too much about the decline of manufacturing?  (Investing Caffeine)

Should economists be looking more to Charles Darwin than Adam Smith?  (NYTimes)