Apple ($AAPL) is now the largest company by market capitalization in the world and is now bigger than the NFL ten times over.  Its impact on the market is significant.  One need only look at the fears this morning about a falloff in iPad orders to see how the market reacts to potential weakness at Apple.

It is no secret that the company also trades at what seems like a low valuation given its recent (and projected) earnings growth.  The prior explanation was that Steve Jobs’ eventual retirement was an overhang over the stock.  That issue is now behind the company.  Implicit in Apple’s valuation is expectations for slower than expected sales and earnings growth and/or its margins will collapse.

Horace Deidu shows that Apple has for some time now traded in line with its cash on the balance sheet as opposed to its earnings power.  By any stretch that is strange behavior for a company with such impressive sales and earnings results. 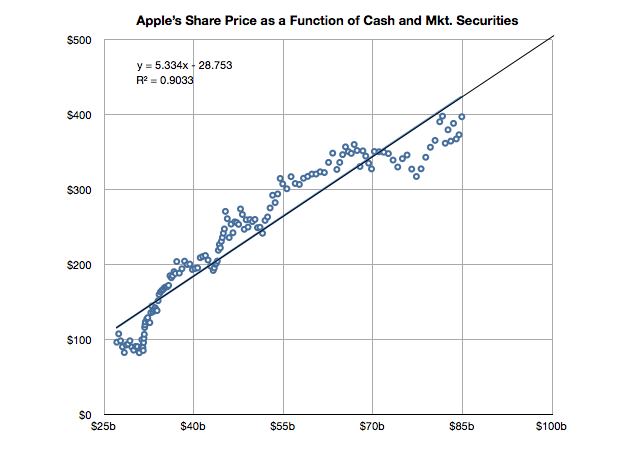 The other explanation is that Apple simply has gotten “too big to succeed.”  Research shows that sector market cap leaders, like Apple, tend to underperform their sectors in the future.  However a look at Apple’s P/E ratio over the past few years has shown significant skepticism valuation-wise.  Apple’s stock has run from $100 to $400 without a notable increase in valuation.

Maybe none of this is surprising to veteran Apple watchers.  However to a casual observer the case of Apple is puzzling. Other market leaders have take far longer to fall from their position as market leaders.  For instance take a look at Microsoft ($MSFT).  Eddy Elfenbein notes how it took the company the better part of a decade to go from growth stock to value stock.

Apple still has cool stuff coming down the pike.  Reports that iPhone 5 will have extensive voice recognition features built in would radically change the smartphone landscape.  It doesn’t seem on the face of it that Apple is on the Microsoft path just yet, but the market doesn’t seem willing to bet otherwise.  Apple is currently perceived as a “safe haven” stock but the market is  pricing in the risk of a significant disruption to Apple’s business.  Strange stuff indeed.

Apple is bigger than the NFL ten times over.  (Things Apple is Worth More Than)

Estimates for Apple ($AAPL) earnings are all over the map.  (Apple 2.0)

The market values Apple on its cash not earnings.  (Asymco)

iPhone 5 could be the first phone to have true voice recognition.  (9to5Mac, GigaOM)