The well-respected Economic Cycle Research Institute has come out with its much anticipated recession call.  They write:

It’s important to understand that recession doesn’t mean a bad economy – we’ve had that for years now. It means an economy that keeps worsening, because it’s locked into a vicious cycle. It means that the jobless rate, already above 9%, will go much higher, and the federal budget deficit, already above a trillion dollars, will soar.

Here’s what ECRI’s recession call really says: if you think this is a bad economy, you haven’t seen anything yet. And that has profound implications for both Main Street and Wall Street.

Assuming a recession is already at hand what does that mean for corporate earnings?  In all likelihood they have only begun to fall.  James Bianco writes:

The stock market has been coming to terms with weaker economic growth for some time now.  One need only look at the relative performance of the industrial sector vs. consumer staples to see that since March we have seen notable weakness in cyclical names. 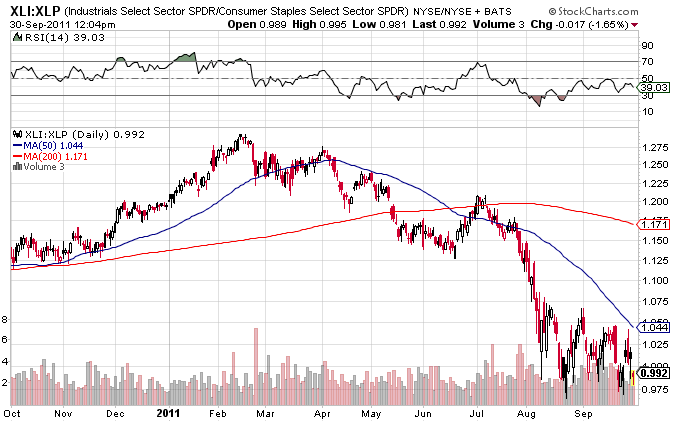 Assuming earnings estimates have to come down, how much farther can the stock market go.  Unfortunately the evidence there is quite variable.  Jason Goepfert at SentimenTrader recently looked at how the stock market fares in a recession.  From the top in April the S&P 500 is down nearly 18%.  The average decline in a recession is down 24% but it comes with a great deal of variability. 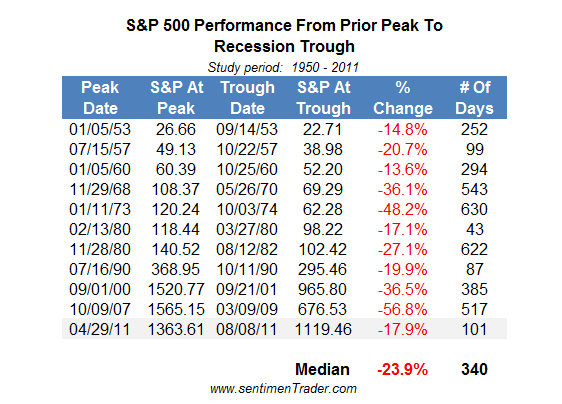 If the markets were to revert to the norm another 6% down would not surprise anyone.  However another 240 days of volatility like we have seen of late would likely put many traders out of commission.

US economy tipping into recession. (ECRI)

What happens to earnings in a recession?  (Big Picture)

What happens to the stock market in a recession?  (SentimenTrader, MarketBeat)