Halloween is right around the corner and that means we should check in on the the Halloween indicator.  It has been known for some time that market, here in the US and elsewhere, tend to outperform from roughly Halloween through the end of April.  John Nyaradi at Minyanville writes:

On a historical basis, the research indicates that the market generates better rates of return from November through April than from May through October. And the difference is significant.

2011 was a textbook example of the ‘Sell in May’ phenomenon at work.  The stock market topped out right around the beginning of May and until last week looked like it was headed back into bear market territory.  In the meantime the bond market not only held its own but showed positive total returns. 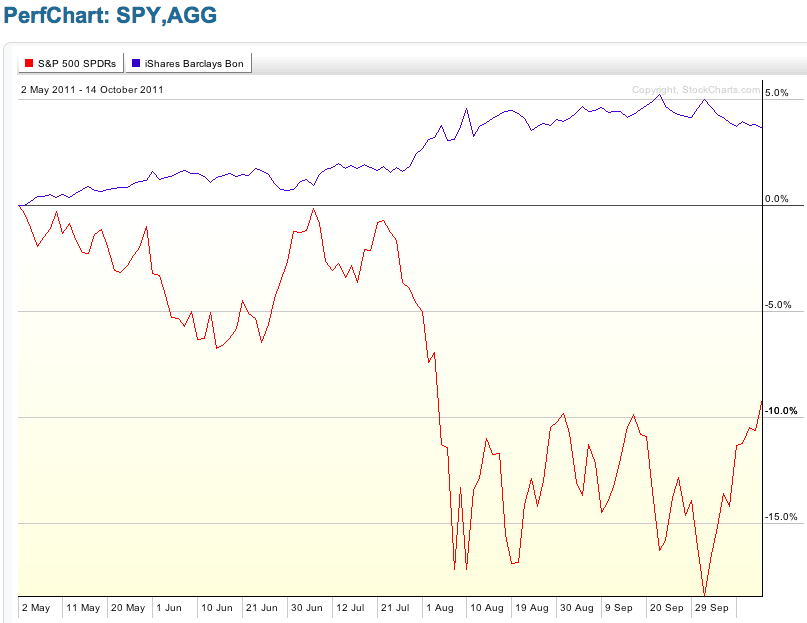 Now there seems to be more evidence that SAD or seasonal affective disorder may be at work in driving the Halloween indicator.  From PsychCentral:

A recent study published in Social Psychological and Personality Scienceshows that people who experience seasonal depression shun financial risk-taking during seasons with diminished daylight but are more willing to accept risk in spring and summer.

It has been thought for some time now that SAD could have an effect on risk aversion.  Now there seems to be some experimental evidence that this effect is real not only for hard core sufferers of SAD but the general population as well.  Like all biases SAD is something we need to be aware of and try to offset in our actions.  This is easier said than done.

The existence of seasonal effects flies in the face of efficient markets.  A reasonable explanation should get investors some comfort that the Halloween indicator is more real than your traditional ghost story.  Most investors are not equipped to take on the challenges of market timing.  However seasonal effects are something that many investors could take advantage of if they so choose.  A couple of trades a year is not an insurmountable task.

Jacobsen and Bouman, “The Halloween Indicator, ‘Sell in May and Go Away’: Another Puzzle.”  (SSRN)

Kramer and Weber, “This is Your Portfolio on Winter: Seasonal Affective Disorder and Risk Aversion in Financial Decision Making.” (SJDM)