Netflix is far from a failure, but its current predicament shows the fragility of business models in the modern age.  One need only look at the company’s stock price of late. 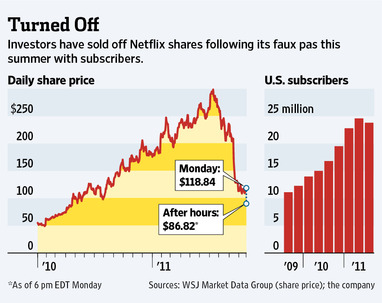 But Netflix’s success was based on the brilliant disruption of an existing, entrenched model with something consumers didn’t realize they needed.

Now Netflix is just another company trying to win in the increasingly competitive, costly world of streaming. That Hastings has stumbled multiple times shows how nobody quite knows what will work or who will win.

Dan Frommer at SplatF notes that if nothing else Netflix has been successful in drawing a line in the sand between the two businesses:

Only 7% of Netflix’s new streaming subscribers — the future of the company — are signing up for DVD rentals. All of this trouble that Netflix has been through is in an effort to kill the DVD, so Netflix can push consumers and Hollywood toward an era of streaming. And despite all the drama, losses, and brand damage, it seems to be working.

The sad reality is that Netflix had a chance to built a bit of a moat around its business model. Earlier when the year when its stock price was substantially higher it could have sold shares to build it cash balances to pay for what are going to be higher content costs down the road.  Felix Salmon at Reuters writes:

In hindsight, it’s pretty clear that Netflix CEO Reed Hastings let the bubblicious stock price — it briefly topped $300/share at the beginning of the quarter — go to his head. The company was swimming in money! And so, in September, Hastings signed a deal to pay $30 million per moviefor everything that DreamWorks creates, in return for the right to stream those movies a few months after they’re released on DVD.

Unfortunately Dreamworks is unlikely to take stock in lieu of cash for those deals. By some measures Netflix stock is still expensive.  Rob at TechInsidr writes:

If you take the low-end of $NFLX’s Q3 guidance look at it on an annualized basis, it results in yearly EPS of $1.44. As of this morning, Netflix is trading at $74.00 per share, which results in a relatively high P/E ratio of 51.38. So even though Netflix has already lost a significant amount of value, the stock is still expensive from a valuation perspective.

Analysts have by and large been wrong about Netflix with many of them maintaining their buy ratings up until last night’s earnings release.  @bespokeinvest writes:

Prior to yesterday’s earnings report, $NFLX had more than twice as many buy ratings as sell ratings.

Big moves in a stock also create big emotions.  For a brief time the $NFLX symbol was trending on Twitter.  The bulls recognize that Netflix is still the leader in the streaming video space and likely hold out for a takeover by a deep-pocketed rival.  The bears note that investor psychology has been shot.  In any event the game has changed as Steven Place at Investing With Options writes:

Since the last earnings report, the stock has completely changed from a fundamental, sentimental, and technical basis. Therefore the accuracy of the option pricing could be completely off base, and that’s what happened this time around.

The end to the Netflix story has yet to be written, but it is likely a very different envisioned just a few short months ago.

Other items worth a look:

Losses pile up at Netflix.  (SplatF)

How to play Netflix volatility.  (Investing With Options)

The case for Netflix.  (Business Insider)

A series of unfortunate buybacks.  (Dealbook)

Why being a value investor is difficult.  (Peridot Capitalist)