In the above tweet Barry Ritholtz takes a shot at the buy-and-hold crowd who now after a furious market rally are sitting just above breakeven for the year.  Below is a chart of the S&P 500 SPDRs ($SPY) for the year-to-date. 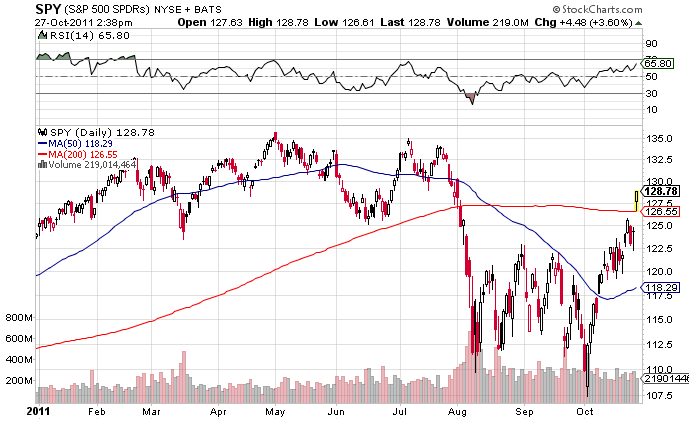 Barry has been spot on this year by reducing exposure back in August and adding additional exposure early last week.  So he is coming at the issue of buy-and-hold vs. market timing as someone who has played the market like a fiddle this year.

The problem is that most investors are not pros and don’t have the wherewithal to trade (or time) the market.  In fact most investors suffer from the “behavior gap.”  They buy high and sell low.  Throughout the late summer there were a slew of articles highlighting the fact that many investors had given up on the stock market for good.  The volatility had simply gotten to be too much for them.  Those investors are likely looking on this rally with gnashed teeth.

In that light the returns to a buy-and-hold, or what we would prefer as a broadly diversified portfolio regularly rebalanced doesn’t look that bad.  A positive price return on the S&P 500 plus some additional dividends won’t exactly put you on Easy Street but it is better than the alternative which in this environment is a money market fund yielding 0.01%.

A hands-off approach is admittedly a sub-optimal strategy, but one that many investors can follow.  If the alternative is rushing in and out of the market based on recent past returns then it looks good in comparison.  Sometimes by doing less you actually may be doing yourself a favor.

Update:  Barry Ritholtz sent this addendum along via e-mail:

Whenever I give a speech to mom & pop investors, I always begin by saying this:

“Here is the best free advice you will ever get:

The easiest, simplest, least risky thing you can do with your money is to dollar cost average on a monthly basis into a few indices – SPX, QQQ, Emerging Markets, Small Cap. If you can add a risk management component – get out of stocks when they break their 10 month moving average – that’s even better.

You will most likely ignore this advice, because if you followed it, you would have nothing to say at BBQs and cocktail parties.”

Lightening up on small caps and emerging markets.  (Big Picture)