Howard Lindzon, “You stay in the game long enough so you can keep swinging and sometimes magic happens.”  (Howard Lindzon) 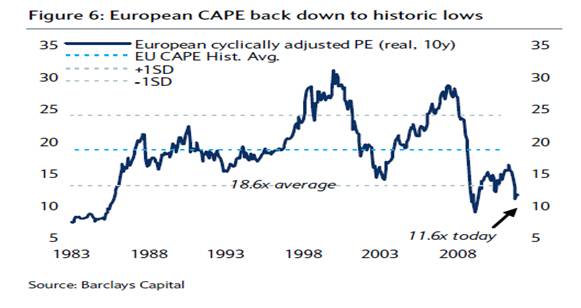 Why the Santa Claus rally may be a real thing.  (Marketwatch)

David Einhorn is not backing off of his Green Mountain Coffee ($GMCR) short.  (Reuters)

“It’s hard to see a happy ending” at Research in Motion ($RIMM).  (SplatF)

How the iPhone changed the balance between carriers and handset makers.  (WSJ)

Apparently the business of America is tax-shifting. How the Cayman Islands became the new Puerto Rico. (Bloomberg)

ProShares is planning to launch a new kind of volatility ETF.  One that uses a 15% volatility target.  (IndexUniverse)

Which ETF gives the “purest exposure” to the renminbi?  (IndexUniverse)

European banks are selling everything they can including US mortgage backed securities.  (FT)

The Fed’s post-crisis policies may be entering a new phase.  (Econbrowser)

An in-depth look at Tyler Cowen’s The Great Stagnation.  (FT)

The coming renaissance in American manufacturing.  (The Atlantic, Bonddad Blog)

History matters far more than we think in economics.  (Stumbling and Mumbling via Economist’s View)

A sign of the times.  Apartments are the new malls.  (WSJ)

Sometimes the best trade is no trade at all.  (Dinosaur Trader)

Likely the best gift you can give this season.  (Marketwatch)