This is for many the last linkfest of 2011.  We hope you continued to find something of value on Abnormal Returns in 2011.  Here’s hoping for better markets in 2012.  Happy New Year! 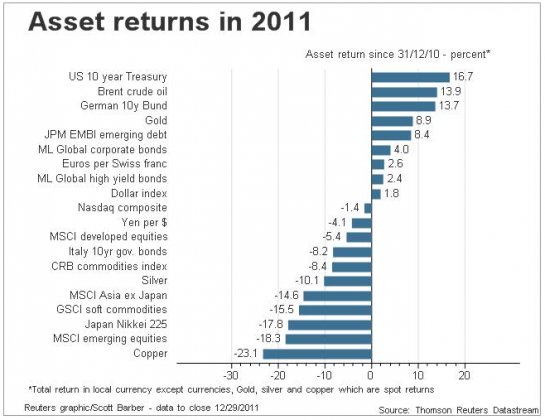 What happens after a flat year for the S&P 500?  (MarketBeat)

The Dow is set for a golden cross.  (Focus on Funds, Bespoke)

The 10-year Treasury yield tells all.  (the research puzzle)

The one skill financial planners need to learn.  (I Heart Wall Street)

Congressmen just like most individuals would be better off by not trading so much.  (WSJ, Clusterstock)

How to use tax-advantaged savings vehicles.  (The Atlantic)

Which stock would you rather own:  McDonalds ($MCD) or Apple ($AAPL)?  (Deal Journal)

Ten things we learned about about Apple in 2011.  (SplatF)

Hubris and the fall of Sears Holdings ($SHLD).  (NYTimes)

Why Mark Hurd, former CEO of Hewlett-Packard ($HPQ) had to go.  (SAI)

The worst footnote of 2011 goes to… (footnoted)

Why is Gap ($GPS) spending so much on share buybacks?  (YCharts Blog)

A raft of stock options issued at the depths of the financial crisis are now in the money.  (NYTimes)

How about a short-term junk bond ETF?  (IndexUniverse)

The case for cautious optimism about the economy in 2012.  (Capital Spectator)

Have we mis-estimated the economy’s potential output?  (Sober Look)

More of the best economics books of 2011 including Emanuel Derman’s Models.Behaving.Badly.  (Capital Spectator)