A quick post on the topic of politics and investing.  Jeff Miller at A Dash of Insight has noted many times that investors should be “politically agnostic” when it comes to their investing.  In short, don’t let your political views affect your investing.  Like all rules there are some exceptions.

However a recent post at Global Macro Monitor got us thinking.  In the post the author talks about the failure of the Obama administration to unleash the “green economy.”  That being said the prospects of the administration and the solar stocks seem to be picking up along with the economy.

We decided to to chart the Intrade probability of an Obama re-election (blue-right hand axis) against the performance of the Guggenheim Solar ETF ($TAN) relative to the SPDR S&P 500 ETF ($SPY) (red-left hand axis).  As you can seen since the beginning of the data set solar stocks have been performing poorly relative to the overall market.  Only recently have the stocks begin to perk up.  That bounce has corresponded with a firming in Obama’s prospects for re-election.  Admittedly solar panel pricing is in part affected by the global economy and other countries’ policies so US politics is only part of the equation. 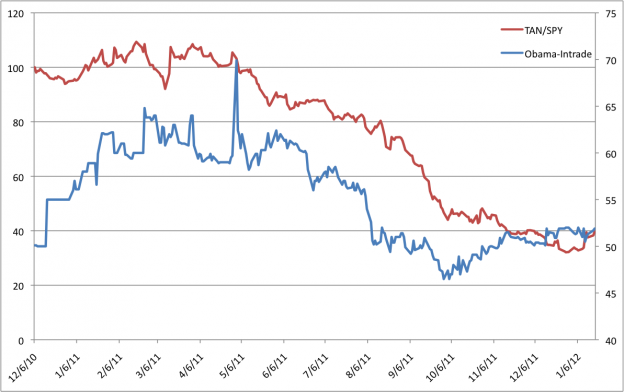 So what does it all add up to?  Who knows.  The bounce in the solar stocks may simply be a reflection of the “dash to trash” by managers playing catch up in 2012.  Then again a smart guy like David Einhorn has covered his short position in First Solar ($FSLR).  The challenge this highlights is investing in sectors and/or companies that are highly dependent on government (subsidies) for their underlying businesses.  In most cases we should ignore politics when investing, but in certain cases you really do have to pay attention.*

Politically agnostic. (A Dash of Insight)

*We are ignoring the entire Solyndra issue for the sake of brevity.