I am old enough to remember the launch of TheStreet.com.* I was really excited. I remember wishing I could attend the star studded launch party. That feeling stayed with me for a number of years as a paid subscriber to the service. TheStreet.com was in many ways the beginning of the trend of melding social with finance, hence social finance. One could argue TheStreet.com driven by Jim Cramer was the progenitor of much of what we see today in the world of social finance.

It was the only place where real money managers talked their book to the audience and amongst themselves. TheStreet.com turned out to be a hotbed for finance talent. A look at a great, vintage Josh Brown post shows just how much the alumni of TheStreet.com have meant to online finance.  However after a while I found myself drifting away from the site, eventually giving up my subscription. My visits to the site today in my role as blogger are quite limited. Why?

In short, TheStreet.com like many other media properties got disrupted. First the emergence of the blogs provided finance-focused writers their own, open platform to connect with readers. The blogosphere is now a well-established part of the finance scene. So much so that the mainstream media has adopted the blog format in a very real way. Second the emergence of microblogs in the form of Twitter and StockTwits has further enhanced the ways in which traders and investors can connect. Investors now to track news and conversation in real-time.

Herb Greenberg of CNBC, and a former TheStreet.com writer, had a great post up yesterday talking about how the rise of social finance has changed the way he does his job. It is a nice short history of how the financial media has been transformed into a multi-channel, social regime.  Greenberg writes:

Whoever thought I would be getting story ideas from the stock tickers that are “trending” real-time on a three-year-old site called StockTwits, which has become the Twitter of stocks? I certainly didn’t until I realized some of these out-of-the-way names were trending for a reason. Now, whenever I want to know why something is happening to a company, the first thing I do is check out the real-time feeds on StockTwits, which make stock message boards seem so old school.

That is not to say that breaking into the upper echelons of social finance is easy. I argue in my book that the blogosphere, and by extention the microblogosphere, is an imperfect meritocracy. There are few overnight successes. Those bloggers you see with wide readership or traders on StockTwits who have a large followership have earned their positions through dedication and hard work. For those interested Phil Pearlman has a great post up on what it takes to become an accomplished finance blogger.

I would argue that a more highly developed social finance is one of the reasons why there has never been a better time to be an individual investor. Prior to the adoption of social finance finding investors or traders of like mind and communicating with them in any sort of meaningful way was a much tougher task. Now those interactions are global and happen in real-time. In that post I wrote:

More social:  Blogging and microblogging (StockTwits & Twitter) has opened up the world of idea generation to the masses.  Anyone with a computer these days can put his or her ideas out there for the world to see.  The blogosphere and Twittersphere is a meritocracy, albeit imperfect, where the smartest and most generous contributors rise to the top.  The social model is pushing into things like earnings estimates with Estimize and institutional-grade services like SumZero.  Many bloggers these days make fun of the raft of ‘free’ webinars that go on these days.  But if you think about it the software and Internet speeds were not there to make mass online seminars possible not all that long ago.

That is not to say that being more social necessarily leads to better outcomes. Research shows that traders are somewhat selective in their disclosures and simply mimicking what seems like successful traders is a risky strategy. Tim Richards at the Psy-Fi Blog writes:

All this being the case you have to suspect that the impact of social networks on active investing strategies is likely to promote and encourage them, as the transmission of successful trades can be much more rapidly propagated amongst an increasing large network of friends. Indeed, people are likely to congregate to those investors they see as being especially successful, and form larger networks. The focal nodes of those networks are then more likely to demonstrate self-enhancing transmission bias in order to maintain their reputation.

All that being said there is demand on Wall Street for people who can claim some expertise in ‘social finance.’ The irony being that social finance is still a nascent trend. In a very real sense we are just scratching the surface of what can be accomplished in this realm. As you can see through their actions to-date much of mainline finance is still in the dark on the subject.

As for TheStreet.com it still seems to be struggling. They have clearly made mistakes along the way missed some big opportunities. The company just hired a new CEO. As you can see from the chart below the stock remains in a decade-long slump. As is often the case the originators of a trend or new business often fail to see a meaningful payoff from their foresight. 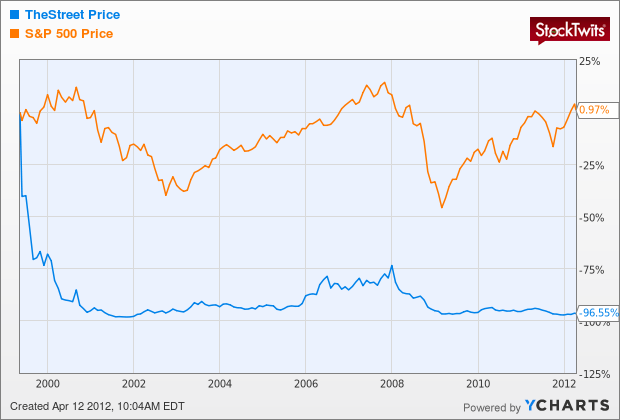 Jim Cramer, co-founder of TheStreet.com comes in for a great deal of criticism for his work on CNBC these days. Much of which is likely justified. When I hear that criticism of Cramer I don’t really dwell on it. I prefer to think about the role he played in helping make the world of social finance we see today. A world that is by all accounts “more democratic and accessible” and still just getting ramped up.

*No position (or opinion) on TheStreet.com ($TST) stock.

TheStreet.com: Motown Records of the financial web.  (The Reformed Broker)

How the job of business journalism has changed in the social media age.  (Herb Greenberg)

Great notes for any one trying to break into financial blogging.  (Phil Pearlman)

There has never been a better time to be an individual investor.  (Abnormal Returns)

Self-enhancing transmission bias or why traders like to brag.  (The Psy-Fi Blog)

Wall Street is keeping a tight rein on Twitter use.  (Dealbook)