Invictus, “Retail investors should be circumspect (to put it politely) of any offering they’re able to get their hands on. If you can get it, chances are you don’t want it.”  (Big Picture) 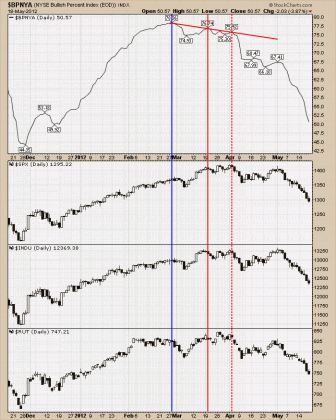 Oversold conditions do not mean a low is in place.  (StockCharts Blog)

Investor sentiment is still not particularly bearish.  (The Technical Take)

The list of countries currently in a bear market.  (World Beta)

Why are smart people doing so much stupid stuff?  (The Reformed Broker)

Ray Dalio on the “beautiful deleveraging” in the US and risks of a full-on collapse in Europe.  (Barron’s)

Tom Brakke, ‘Try to explain your strategy in reference to Fama’s view of the world and your decision process in light of Kahneman’s observations of human behavior.”  (the research puzzle)

Stop with the whining about the Facebook IPO already.  (Henry Blodget)

Facebook has a unique relationship with its users (and shareholders).  (Jason Zweig)

Aswath Damodaran, “Facebook has a great product, but it’s not a great company yet.” (Dealbook)

How is Facebook going to keep all these newly minted rich engineers motivated?  (WSJ)

The golden age of Silicon Valley is over.  (The Atlantic)

The ever changing model of startup hubs.  (A VC)

How did London become such a hotbed for bank speculation?  (John Gapper)

How insider trading is different than other financial crimes and why the penalties should be different as well.  (Slate)

Why Spain needs to leave the Euro.  (Michael Pettis)

The bank run in Spain is real.  (Sober Look)

Is the ‘Geuro‘ the solution to the problems of Greece?  (Money Game)

Why Japan is never going to default and any one betting so is likely to lose out.  (Clusterstock)

The economy in the ‘B’ in BRICS is shrinking.  (FT)

The Canadian housing bubble has nothing on Australia.  (Bronte Capital)

Is Iceland a model for other struggling European economies?  (WSJ)

Why we need more public companies, not less.  (Economist)

Don’t get too excited that things will change at the Fed any time soon.  (Economist’s View)

On the myth we don’t make anything in America any more.  (Aleph Blog)

Why tech jobs create more of a ripple effect than other industries.  (Free exchange)

Top clicks this week on the site.  (Abnormal Returns)

Seth Godin, “There’s no such thing as a true story.”  (Seth Godin)

How retina displays change the reading experience on the iPad.  (Slate)