Howard Lindzon, “Tuesday is just as good a day as ever to begin to invest, begin a career in the equity markets or pursue a career in Venture Capital. It is your commitment to your goals that matter and your angle of attack. Start building domain experience around your passion today!”  (Howard Lindzon) 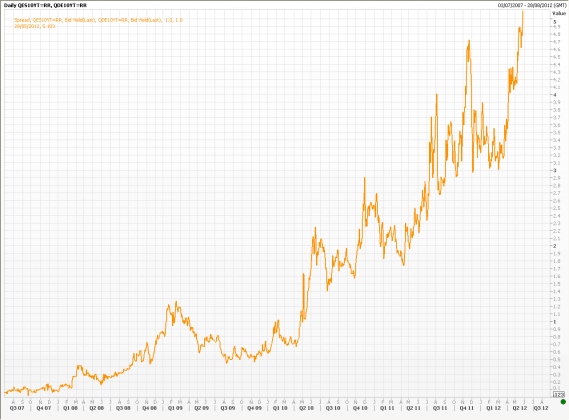 The spread between Spanish and German yields continues to blow out.  (FT Alphaville, ibid)

Investor sentiment is a mixed bag at the moment.  (The Technical Take)

Markets should be paying more attention to China, not Europe.  (Humble Student of the Markets)

What role do commodity indices have on oil prices?  (Econbrowser)

Regulating high frequency trading would be a logical response at this point.  (Streetwise Professor)

Why bearish calls are so easy to make.  (The Reformed Broker)

Chris Dillow, “(P)eople are too quick to perceive skill and thus to pay for something that doesn’t exist. The demand for forecasters and tipsters substantially exceeds the real ability such pundits actually have.”  (Stumbling and Mumbling via Economist’s View)

If you own Santander preferreds you should probably read this.  (Bronte Capital)

Who would stand behind Eurobonds?  (NYTimes)

To add insult to injury olive oil prices in Europe are dropping.  (FT)

The SNB is preparing for a Euro crackup.  (WSJ)

On the many troubles still facing the Indian economy.  (naked capitalism)

The US housing economy continues to recover.  (Sober Look also Globe and Mail)

Putting the Facebook IPO in some economic context.  (Modeled Behavior)

US consumers have decoupled from the Euro mess.  (Sober Look)

The markets are going to bring to bear a lot of ‘evidence’ this week. (A Dash of Insight)

The coming week is filled with opportunity…and data.  (UpsideTrader)

The economic week that was.  (Bonddad Blog, Calculated Risk)

The economic schedule for the coming week.  (Calculated Risk)