Josh Brown at The Reformed Broker had a good post up yesterday detailing the ten reasons why he likes stocks for the second half of the year. Josh admits that he doesn’t know where stocks are headed but lays out a compelling case. Here is a sampling:

10.  Pessimism is now the base case scenario. This means that any positive news, from any quarter, should have an outsized effect on asset prices.  Take housing for example – a more important cog in the wealth effect wheel than any other facet of the economy (housing is 10X more important to American confidence, employment and spending than the price of the Dow Jones Average).  Anyway, the housing market is alive.  It’s good not great, but it’s on the upswing and no one believes it.  What happens when they do?

Another reason Josh left off his list was the positive seasonality of the Presidential Election Cycle or ‘PEC’. Historically the stock market has performed better in the second half of presidential terms. You can see this in the chart below: 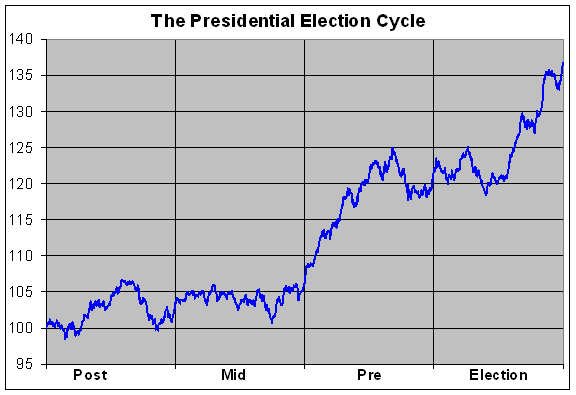 The PEC remains a bit of a mystery to financial researchers. That being said the historical data is compelling, especially from the vantage point of the middle of the election year.

In some sense this period of time sets up in the mind of investors a win-win scenario. If the economy strengthens during the time up to the election this would provide some comfort to investors nervous about the economy. In short, a win. If the economy noticeably weakens over this time period presumably there would be a change in administration and a renewed emphasis on measures to boost the economy. Again a positive for investors.

This is a dramatic oversimplification, but it helps explain why over various economic and election cycles investors are willing to bid up stocks headed into an election. Post-Election Day reality will once again kick back in but for a few months investors can in their own minds conjure up positive stories no matter who is elected. Josh’s list is a more complete reading of the current market situation but it never hurts to take a look back at history for a touch of perspective.