Joe Weisenthal, “Earnings are at new highs, and the data is doing the opposite of deteriorating. To say that the market is somehow squeezed between the Fed and reality is preposterous. Both are favorable right now.”  (Money Game) 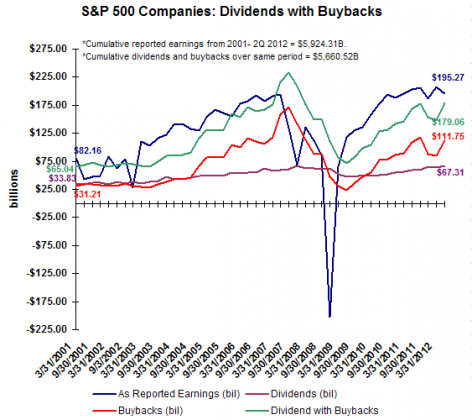 Why you should expect to see a surge in special dividends in Q4.  (Income Investing)

Too high aspirations as a form of leverage.  (Jason Zweig)

The only iPhone 5 feature that matters: LTE.  (ReadWriteWeb)

Apple should have weaned itself from Google Maps a long time ago.  (Apple 2.0 also Pando Daily)

Wall Street is about selling stories, even if they don’t make sense.  (The Reformed Broker)

The days of megabuyouts are gone.  (Deal Journal)

The ETF price wars are raging: who wins?  (The Reformed Broker)

What do low ETF fees mean for investors?  (Ari Weinberg)

The spread between the yield on mortgage backed securities and actual mortgages continues to grow.  (Sober Look)

The ECRI WLI is at its highest level in over a year.  (dshort)

States haven’t made much headway in cutting the pension funding shortfalls.  (WSJ)

Olive oil prices have surged 50% in the past three months.  (Economist)