Josh Brown, “The stupidity of having such an obviously unbalanced economy is the more important discussion we should be having right now. The corporations are every bit as vulnerable to the disappearance of the middle class as the middle class is itself.”  (The Reformed Broker) 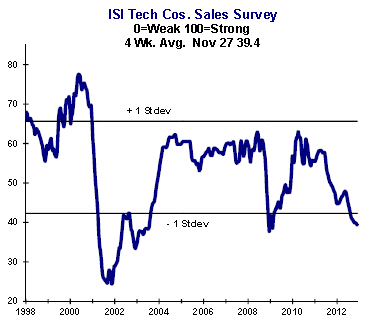 The technology sector is weaker than commonly believed.  (Sober Look)

Which view of China’s stock market is right?  (Dynamic Hedge)

Where one TAA model stands going into December.  (MarketSci Blog)

Day of the month seasonality for December.  (MarketSci Blog)

Not every MLP is created equal.  (WSJ)

Do you want your hedge fund to have 80% of their assets in two stocks?  (research puzzle pix)

A Microsoft ($MSFT) comeback seems like a distant hope.  (SAI)

If you aren’t looking for your money, who is?  (Howard Lindzon)

The fiscal cliff is a media creation.  (Barry Ritholtz)

A new class of investors is buying American houses.  (Economist)

The SEC and CFTC should merge.  (Economist)

Europe is still at risk of blowing up.  (Tyler Cowen)

Norway wants to buy some quality US real estate.  (Bloomberg)

On the plus side 2013 should be the end of the financial crisis for the US economy.  (Money Game)

What would happen if all the Bush tax cuts lapsed?  (Econbrowser)

A look back at the economic releases for the week.  (Bonddad Blog, Calculated Risk)

A look at the economic schedule.  (Calculated Risk, Money Game)

What you missed in our Saturday long(ish) form linkfest.  (Abnormal Returns)

US birthrates continue to plunge.  (Slate)

The law of unbundling.  (Leigh Drogen)