Josh Brown, “The sold-out bull is desperate and his mind is twisted, every thought and expenditure of energy is employed toward the creation of a lower entry back into the markets. Only a cheaper buy-in will vindicate the earlier decision to sell that haunts him so.”  (The Reformed Broker) 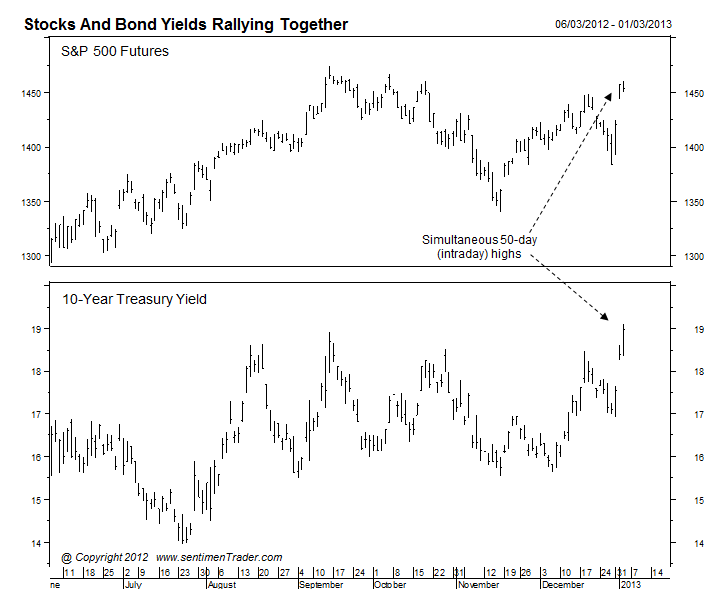 Stocks and bond yields both hit 50-day highs. What next?  (SentimenTrader)

The benefits of muni bonds came through the fiscal cliff intact.  (Bloomberg)

How did piggybacking on hedge fund stock picks in 2013 work out?  (World Beta)

Checking in on the slope of the yield curve.  (research puzzle pix)

Has the nation’s social mood swung too negative?  (Minyanville)

How can investors avoid the siren song of the financial media?  (Systematic Relative Strength)

Why you can’t rule out the influence of Steve Jobs on Apple ($AAPL) just yet.  (Market Safari)

How private equity and venture capital could work together in 2013.  (Pando Daily)

Why mortgage rates are not headed much lower.  (Term Sheet)

Contrarian alert: commodity ETFs were not hot in 2012.  (Focus on Funds)

Canada continues to pump out new jobs.  (Globe and Mail)

What will the end of QE mean for the emerging markets?  (beyondbrics)

Why is the non-farms payroll number so seemingly predictable?  (Felix Salmon)

The end of history illusion: why we underestimate how much we will change in the future.  (NYTimes)