Sometimes as a blogger it is fun to revisit past posts to see what, if anything, has changed since you wrote that post. Way back on November 30, 2011 I wrote a post on Apple ($AAPL) talking about the fact that Apple had become a megacap stock and research shows that the largest company in any sector tends to underperform over time. Back then I wrote:

Apple is no longer the scrappy company that produces ads based on 1984. In a certain respect Apple now is the establishment. In its chosen markets Apple is the leader. That is why other smartphone carriers target them in their ads. That is not to say that the stock can’t outperform in the future, it just means that is going to be increasingly difficult for it to do so.

That post was clearly premature because Apple stock did go onto to outperform for much of 2012. However after taking into account this morning’s decline Apple’s stock is pretty much trading in line with the S&P 500 since that post back in late 2011. 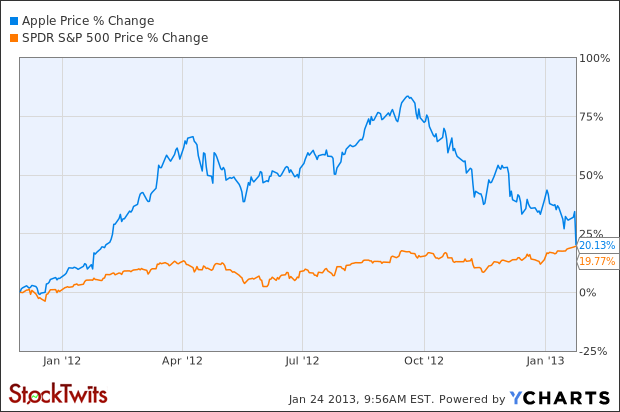 Even after today’s decline Apple is still a megacap company (and stock) with a market cap around $430 billion. Plausible arguments can be made for the stock making a bottom here given the hoard of cash on the balance sheet or one could argue that given the rapid change in expectations growth investors will continue to bail on the company. Either way, it is useful to put this action into the context of how megacaps typically perform (or not).