It is often said that generals are always preparing to the fight the last war. The same thing could be said of investors as well. Investors are prone to extrapolate the recent past well into the future. For example, nearly four years into a bull market only now are investors beginning to put money back into equity mutual funds.

This point is well-illustrated in a series of graphics from David Rosenberg, via Business Insider, showing magazine covers from the most important eras finance of the past two decades. These include the Internet bubble, housing boom and the Great Recession. These compilations show how investors become slowly convinced as to the inevitability of the trend at hand.

In terms of trends there are few more well-established than the bond bull market. For over thirty years now bond yields have done little more than go down. Maybe because the trend has been so long-standing there is no cluster of magazine covers to highlight it. However a look at the graph below shows just how far yield have come from the end of the highly inflationary decade of the 1970s. 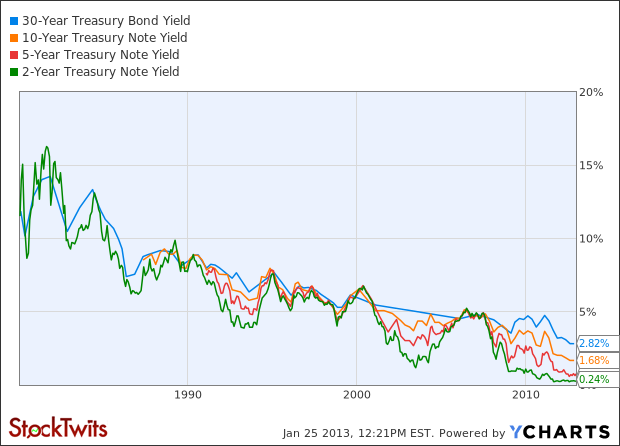 Some investors are taking notice that this downward trend in interest rates at some point has to end. Josh Brown at the Reformed Broker notes how the big bond mutual fund shops like Pimco and DoubleLine are ratcheting up their equity fund offerings to take advantage of what might very well be expected to be a change in interest rate regimes.

A core tenet of risk parity is that when stocks are falling, bond prices typically rise. By using leverage, bond returns can help make up for losses on stocks. Without leverage, bond returns in a typical pension portfolio of 60% stocks and 40% bonds wouldn’t be large enough to compensate for low stock returns.

Leo Kolivakis at Pension Pulse notes risk parity strategies are more than just leveraging up bonds. However the heavy emphasis on bonds is what is giving some writers pause. Roger Nusbaum at Random Roger thinks the demise of risk parity is likely off a few years. However Stephen Gandel at Fortune is skeptical about the idea that leveraging up an asset at the end of a multi-decade bull market is necessarily a good thing. He writes:

But it’s also just the type of talk – that something like levering up your portfolio is safe as long as you use that leverage to buy bonds – that always pops up, and gets taken as gospel, just as bubbles are about to burst.

The bond bull market has gone on, with the help of the world’s central bankers, longer than most anyone would have believed in 1980, 1990 or even 2000. However at a time of calm bond markets and supportive equity markets, investors have the chance to think ahead to how a sustained rise in interest would affect them and their portfolios.

Things change. Bull markets end. Sometimes quietly, sometimes not so quietly, see the stock market implosions of 2000 and 2008. Investors need be sure they are not fighting the last war but are looking ahead to the next one. The bond bull market will end some day and strategies over reliant on an interest rate tail wind will suffer. The big bond market guys are looking ahead. So should you.