Duncan Black, “The 401(k) experiment has been a disaster, a disaster which threatens to doom millions to economic misery during the later years of their lives.”  (USA Today via Counterparties) 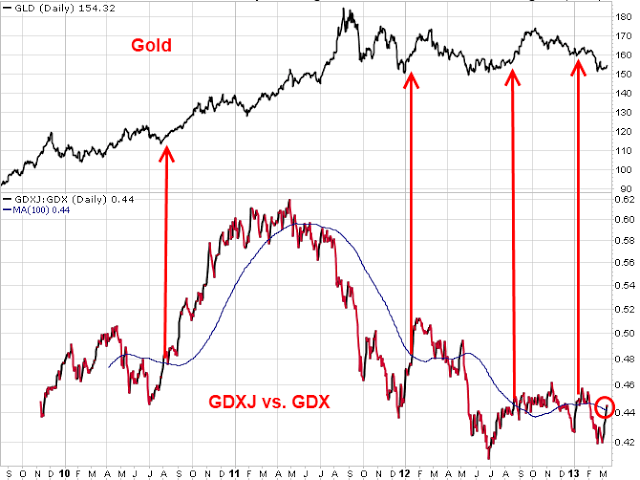 The junior gold miners have begun to outperform the bigger cousins.  (Charts etc.)

Where are the overbought conditions?  (All Star Charts)

Interest rates will rise well before the Fed ever gets around to a rate hike.   (Learn Bonds)

On the downside of bond funds.  (Horan Capital)

How’d market timers do during this past cycle? Not so hot.  (Mark Hulbert, Big Picture)

Why your investment time frame matters so much.  (Big Picture also Random Roger)

What women want in a financial adviser.  (InvestmentNews)

Intel ($INTC) is hoping to get back into the good grace of Apple.  (Quartz)

How Apple gets all the good apps.  (AllThingsD)

Carlyle Group ($CG) is lowering the gate to its funds. The question is whether you want to go in?  (WSJ, research puzzle pieces)

Spinoffs are big business these days on Wall Street.  (Dealbook)

How is Estimize doing against Wall Street estimates?  (Covestor)

What the Fidelity announcement says about the plans for their own ETFs?  (Focus on Funds)

How Pimco and Schwab got into the $10 billion ETF assets club.  (FT)

Are ETFs in practice more tax-efficient than mutual funds?  (Morningstar)

Schwab and Vanguard are once again in an price war.  (FT)

The ten most exotic ETFs.  (IndexUniverse)

Spain’s economy is slightly less horrible than it was.  (Sober Look)

Chinese ‘ghost towns’ are not as prevalent as commonly thought.  (Money Game)

Why Germany avoided the worst of the Euro crisis.  (Quartz)

How Turkey won in the aftermath of the Iraq war.  (FT)

The ‘resilient consumer‘ is a myth. (MarketBeat, GEI)

Is the stock market indicating a better economy?  (Term Sheet)

Higher overtime is pushing factories to hire.  (Bloomberg via MR)

The price of Amazon Prime may be coming down.  (Wired, GigaOM)

Netflix ($NFLX) is getting all social.  (Bloomberg)