Morgan Housel, “The business model of the majority of financial services companies relies on exploiting the fears, emotions, and lack of intelligence of customers. The worst part is that the majority of customers will never realize this.”  (Motley Fool) 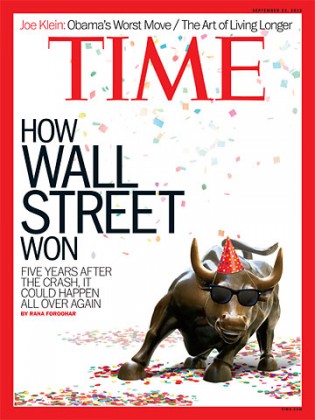 Should we worried by this magazine cover?  (Time, StockTwits Blog, BI)

Should we be worried that stock correlations have dropped?  (Adam Warner, Unexpected Returns)

Two observations doth not a trend make.  (A Dash of Insight)

Rule #1 for investing in IPOs: don’t invest in IPOs.  (Slate)

Apple is laying the groundwork for bigger stuff down the road.  (Canny Vision via DF)

Why the timing of the MoPub acquisition is no coincidence.  (Quartz)

Where Twitter is trading on private markets.  (Business Insider)

Which investors are going to make out in a Twitter IPO?  (UpsideTrader)

Just what is a confidential S-1?  (Dealbook)

The Twitter experience is changing as it attempts to grow and become more mainstream.  (New Yorker)

Dick Costolo proves that founders are not necessarily the best leaders of a company.  (Pando Daily)

How would a Lehman bankruptcy be handled today?  (Breakingviews)

Why Lehman mattered. Markets were surprised it wasn’t bailed out.  (macroresilience)

It has cost $3 billion to wind up Lehman Brothers to-date.  (FT)

We are in year five of money market fund reform.  (FT Alphaville)

If world population starts shrinking what does it mean for the global economy?  (FT Alphaville)

In case you have not yet seen the documentary Floored about the demise of floor traders in Chicago.  (Futures)

Felix Salmon has a rave review for Tim Harford’s The Undercover Economist Strikes Back.  (New Statesman)