‘Tis the season. David Pogue at Yahoo Tech recommends the Jambox Mini for wireless sound on the go.

Justin Fox, “Nowadays financial markets often drive the economy, and while this would seem to give the Fed more power, the amount of effort and attention now put into forecasting monetary policy and assessing its impact mean that exercising that power is far more complicated than it used to be.”  (HBR) 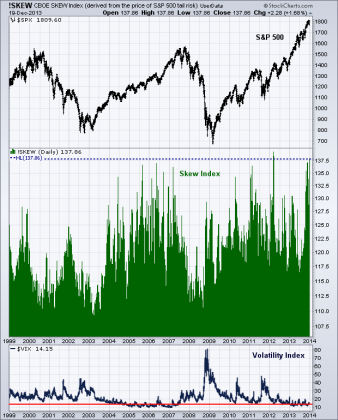 The $VIX may be low but SKEW is high.  (Andrew Thrasher)

The biggest mistakes investors need to avoid.  (A Wealth of Common Sense)

Why a focus on “income” leads investors astray.  (Morningstar)

Barry’s predictions for the markets in 2014 are spot on.  (Bloomberg)

On the return of political risk to the emerging markets.  (FT)

The case for Walt Disney ($DIS) to be the company of the year.  (Michael Santoli)

How SnapChat plans to become a (big) business.  (Fortune)

Why strategy opacity matters when a firm undeperforms.  (WSJ)

The economy is “chugging along” in spite of the pessimists.  (ValuePlays)

A sign that household deleveraging is over.  (Business Insider)

Reviews of The Wolf of Wall Street are rolling in.  (The Wrap, Metacritic)

The stuff left out of The Wolf of Wall Street: the swindled investors.  (Dealbook)

An interview with Terence Winter who wrote the screenplay for The Wolf of Wall Street.  (WSJ)