John Lilly, “We are in a pre-pagerank phase of mobile.”  (Medium) 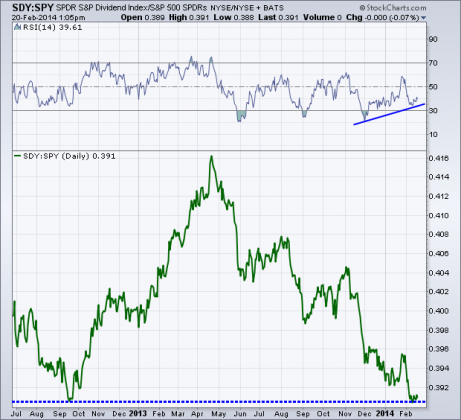 Is it time for dividend stocks to start outperforming?  (Andrew Thrasher)

Interest in biotechs is “off the charts.”  (TheStreet)

Why the dispersion of valuation matters more than average.  (Greenbackd)

Why buybacks are likely to continue apace.  (BCA Research)

Sometimes investors are, for better or worse, out of step with the times.  (Bronte Capital)

The strategic fallacy at the heart of Facebook.  (Dealbook)

How carriers are affected by the rise of stand alone messaging apps.  (Bloomberg)

How WhatsApp could make boatloads of money.  (Business Insider)

Bob Lefsetz, “Just because Mark Zuckerberg fleshed out Facebook that does not mean he’s a visionary.”  (Big Picture)

Is Apple ($AAPL) not being aggressive enough on the M&A front?  (TheStreet, Eric Jackson)

Amazon ($AMZN) wants to get into the set-top box business.  (Recode)

The case for Microsoft ($MSFT) and its new CEO.  (Howard Lindzon)

Tesla ($TSLA) is as much a battery company as anything else.  (Quartz)

Hedge funds are starting to gear up their ad plans.  (Dealbook)

2014 is setting well for global macro.  (All About Alpha)

How batch auctions could fix the HFT problem.  (FT Alphaville)

The pessimism on emerging markets is palpable.  (FT)

“The world has stepped on a monetary brake. And I don’t think it will end well.”  (barnejek’s blog also Sober Look)

Full employment is “solidly in sight.”  (Inside Investing)

Matthew O’Brien, “When the economy is collapsing like it never has before, you throw everything at the problem, monetary and fiscal stimulus.”  (The Atlantic)

The economy is having a hard time finding a equilibrium on broadband.  (Marginal Revolution)

In praise of Om Malik.  (Recode)