Joshua Brown, “If no one believed that anything could ever go wrong, asset prices would be permanently bid up to levels from which no gains could be reasonably expected in the future.”  (The Reformed Broker) 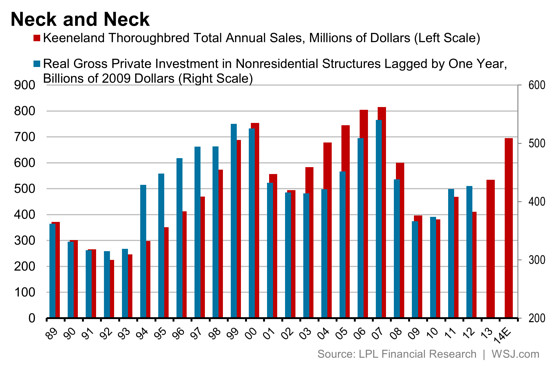 On the link between horse prices and capex.  (Real Time Economics)

Most market stats are just for fun.  (Andrew Thrasher)

Grains prices have gotten crushed YTD.  (Short Side of Long)

What to do when market valuations are high.  (Aleph Blog)

A systematic look at some popular technical indicators shows little there.  (Rick Ferri)

Four questions for Cullen Roche author of Pragmatic Capitalism: What Every Investor Needs to Know About Money and Finance.  (The Reformed Broker)

Microsoft’s ($MSFT) new worldview is a huge change from the PC era.  (Quartz)

Big commodity traders are now even more important as banks step aside.  (WSJ)

Why is America’s payment system so antiquated?  (FT)

Checking in with young bankers in New York and London as they start their careers.  (Dealbook, FT)

Can the ‘FPA Way‘ survive a surge in assets under management?  (Morningstar)

Why the iShares line of core ETFs has been so successful.  (ETF)

Why the end of QE3 is a good thing.  (Calafia Beach Pundit)

Some signs that inflation is bubbling up.  (Capital Spectator)

How the virtual economy is making GDP measurement ever more imprecise.  (The Atlantic)

What you might have missed in our Wednesday linkfest.  (Abnormal Returns)