Ben Carson, “Investing success comes from setting reasonable expectations and anticipating the fact occasionally things won’t work out as you planned.”  (A Wealth of Common Sense) 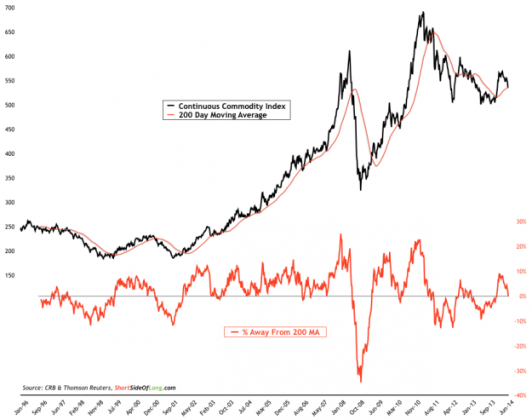 The commodity rally has reversed.  (Short Side of Long)

Video of the day

Steve Leuthold thinks the stock market is due for a correction.  (Wealthtrack)

One thing that could derail stocks is an EPS scare.  (Humble Student also FT)

Where money flowed in Q2, including Spain and India.  (Irrelevant Investor)

A nice review of Cullen Roche’s Pragmatic Capitalism: What Every Investor Needs to Know About Money and Finance.  (A Wealth of Common Sense)

Platform monopolies aren’t surprising. What it is surprising is how they get disrupted.  (A VC)

Google ($GOOG) and Alibaba are so much larger than their national counterparts.  (Quartz)

Does anyone outside of Silicon Valley want a smartwatch?  (Kevin Roose)

Why is Amazon ($AMZN) pushing the drone delivery story?  (Quartz)

How to fix the credit rating system.  (Bloomberg)

Finance is a hierarchy. What if it looked more like a network?  (Points and Figures)

TED, “The wisdom of crowds in the market, as everywhere else, does not arise from the wisdom of each and every member of the mob. It comes from the of idiotic, ill-considered, and just plain dumb opinions held by everybody…”  (The Epicurean Dealmaker)

Now offline advisors have some help to go up against robo-advisors for younger investors.  (TechCrunch)

Fidelity wants to expand its access to IPOs for its brokerage customers.  (Boston Globe)

Is there any value left in emerging market bonds?  (beyondbrics)

On the looming pilot shortage.  (The Atlantic)

What you might have missed in our Sunday linkfest.  (Abnormal Returns)

You can’t think yourself into new and better habits.  (TraderFeed)

You can be too talented for your job if you can’t collaborate and communicate.  (Time)

Why you should turn on two-factor authorization for your important online accounts.  (WSJ)