Ben Thompson, “I think it [Minecraft] has the potential to continue to grow and, along the way, not only make Microsoft a whole bunch of money, but also enable an entire ecosystem. It really could be the Office of gaming.”  (stratchery) 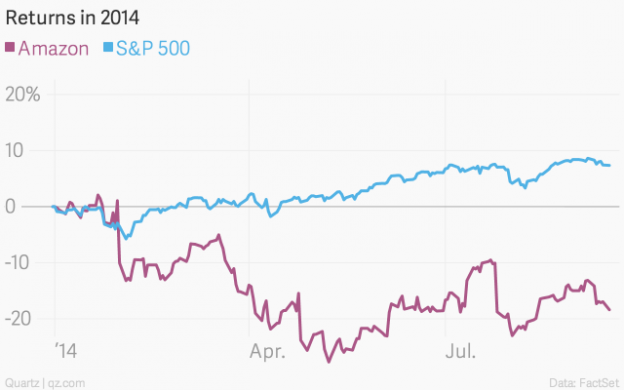 Should we be concerned about the surge in IPOs like Alibaba?  (Lex)

Has the market already incorporated all the positive economic surprises?  (Humble Student)

How often do stocks and bonds fall together?  (A Wealth of Common Sense)

Why some anomalies seem to persist.  (Larry Swedroe)

On the dangers of chasing style performance.  (Rick Ferri)

How to use bootstrapping techniques when you are lacking returns data.  (Capital Spectator)

In defense of a quantitative approach to the market.  (Math Trading via TraderFeed)

On the advantages of mechanical strategies.  (Systems Trader via Whole Street)

What is the “why” of the Apple Watch?  (stratchery)

Don’t underestimate the potential of smartwatches and other wearables.  (Chris Mims)

How companies could incorporate wearables.  (TechCrunch)

Yahoo’s ($YHOO) time as an Alibaba ($BABA) proxy are almost over.  (MicroFundy)

The Microsoft ($MSFT) deal for Minecraft is official.  (Dealbook)

Bill Ackman is set to raise some $2 billion in permanent capital.  (Dealbook, FT)

Why everyone is nervous about slowing Chinese economic growth.  (Sober Look also Quartz)

Why the Fed has plenty of time to turn the switch.  (FT Alphaville)

A preview of this week’s FOMC meeting.  (Calculated Risk)

The fracking boom is bigger than anyone thought possible.  (WSJ)

What you might have missed in our Sunday linkfest.  (Abnormal Returns)

Here’s how to cancel a meeting the right way.  (Mark Suster)

The twilight of the big management consulting firms.  (FT)

The case against “on demand for everything.”  (Recode)

You can support Abnormal Returns by visiting Amazon or follow us on StockTwits, Yahoo Finance and Twitter.