Much has been made of the late about the woes facing some of America’s bluest of blue chips. In quick succession IBM ($IBM), McDonald’s ($MCD) and Coca-Cola ($KO) all announced disappointing results. Two of the companies, IBM and Coca-Cola, are large positions at Warren Buffett’s Berkshire Hathaway ($BRKB), hence its inclusion in the performance graph below. 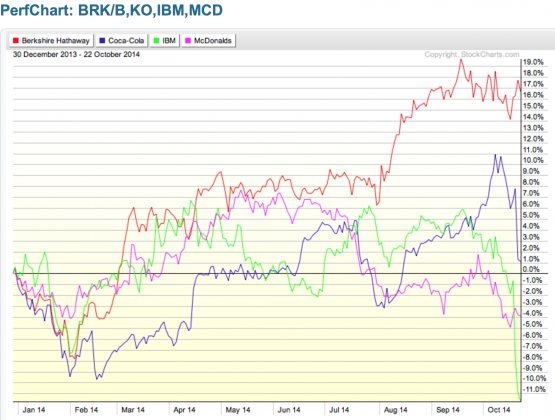 The long-term issues facing these companies are not new. What does seem to be new is some greater realization about the secular issues these companies face. Josh Brown at The Reformed Broker writes:

And all three are plagued by the same problem – they’re shrinking. More than this, their shrinkage is finally being recognized on The Street, now that investors are peeling back all of the layers of buyback and dividend subterfuge that’ve kept this fact disguised for so many years.

That fact of the matter is that blue chip companies die all the time. Some times it is due to shifts in technology or simply changing tastes. Shifting how a large multi-national company does business is no easy task. A recent WSJ article looked the problems facing these companies and other brand name American companies. From the article:

“None of these are pathological companies,” says Anil Gupta, a professor of strategy and entrepreneurship at the University of Maryland. Instead, they had adopted what he calls “sticky” resources, not only technological systems, but employees and business processes that are geared to be successful in a particular range of circumstances.

“That’s what makes you successful. That also essentially locks you into the current paradigm,” Prof. Gupta says. “You become big, but you become trapped.”

What is interesting is that these companies are not necessarily losing out to direct competitors. McDonald’s isn’t getting crushed by Burger King ($BKW). Coca-Cola isn’t losing big chunks of market share to Pepsi ($PEP). They are losing out because the market they are targeting are undergoing dramatic shifts. Everyone today knows soda, even diet, isn’t good for you. Coke can buy as many non-soda brands its can but that will not prevent the long term decline in its core sugar water business.

Consumer non-durables are clearly different than technology but the prospect for companies big technological shifts is now a common refrain from history. Ben Thompson in a recent post at stratechery looks at the potential for current darling Google ($GOOG) to get outflanked by competitors. The whole piece is worth a read because the argument about Google is a subtle one. Thompson traces the story of how IBM, first in mainframes, and then Microsoft ($MSFT), in PCs, were eclipsed by waves of new modes of action.

Thompson isn’t calling for a collapse at Google but a more subtle shift where the business they dominate becomes less relevant. He writes:

And so we have our parallel to IBM and Microsoft. IBM didn’t capitalize on PCs because their skills lay on the hardware side, not software. Microsoft didn’t capitalize on mobile because they emphasized compatibility, not the user experience. And now Google is dominant when it comes to the algorithm, but lacks the human touch needed for social or viral content. And so, when all of that brand advertising finally begins to move from TV to the Internet – and that migration is a lot closer than it was even a year ago – I suspect that Google is not going to capture nearly as much of it as many observers might expect.

Google is not only trying to move into different advertising modes but they are also investing in wholly unrelated businesses like self-driving cars. Google recognizes that the cash cow will have to fund the company’s future. As it is for all of the blue chip companies the question is whether that transition can happen fast enough (and successfully) to satisfy investors. And the time to start thinking about these issues is before the market recognizes them, because when that happens it is already too late.