On May 24, 2012 when the S&P 500 closed at 1320.68 (2075.37 at present) I wrote a post talking about the how the seeds of a new bull market were being sown. At that time in the wake of the very messy Facebook ($FB) IPO there was a lot of talk about how investors, both individual and institutional, were fleeing from the stock market. On top of that equity dividend yields were above Treasury yields, which historically had been a rare occurrence.

Back then on the heels of the launch of my book I took the time to write this is up in a post:

The seeds of a new secular bull market are being sown

In the conclusion of my book Abnormal Returns: Winning Strategies from the Frontlines of the Investment Blogosphere I noted the unusual fact that the dividend yield on the S&P 500 then exceeded the yield-to-maturity on the ten-year US Treasury note as it does now. This hadn’t happened in earnest since the 1950s. The question is why?

One could argue that it is the result of the financial crisis, and its aftermath, but the trend has been in place for quite some time now. John Authers and Kate Burgess have a big article up at the FT that looks at the end of love affair of investors with equities. They not how the trend towards “de-equitisation” of the markets been going on for quite some time.

There are a number of implications for corporate finance, but the question for investors is whether this dearth of interest in equities represents the new norm or whether it means a new more sustainable equity market environment is at hand? Masa Sedarevic at FT Alphaville asks whether the above article can be likened to the famous ‘Death of Equities’ Businessweek cover that presaged the 1980s bull market in equities.

1. Say goodbye to the individual investor on Wall Street. Whatever positive impression they had of the IPO market and the stock market in general was just torched to the ground. When everyone you know associated with the stock market is telling you and the media is confirming that this could be a huge IPO that will make money for those lucky enough to get shares and the opposite happens, goodnight. All confidence in the stock is destroyed. Put your money in the bank or if you want to gamble, at least slot machines in Vegas pay out 98pct.

There are plenty of signs that individual investors have to a degree sworn off equities. Sean McLaughlin at The Minimalist Trader thinks the next big market downturn will serve as a catalyst to change the environment on Wall Street from one of people ‘playing the market’ to one of people actually investing in businesses. McLaughlin on what happens first:

The more I hear retail investors complain about “rigged markets” and “the one-percenters” while singing songs about the death of buy-and-hold investing, the more I think the next sizable sell-off is gonna be “The Big One.”

But I don’t mean the “Big One” in terms of percentage losses or capital destruction (although likely both could be huge), it’ll be big because the next big sell off could very possibly be the end of the stock market game for millions of investors in America and around the world.

So you can see how the seeds of a generational bottom or a new secular bull market are being sown. Unfortunately with these seeds we do not know how long it will take them to germinate. Valuations now favor equities vs. bonds. Investors (pro and amateur) continue to withdraw funds from the equity markets and anecdotal evidence points to growing dissatisfaction with the current market regime.

If you believe McLaughlin it will take additional pain to get the weak hands to capitulate. That is a scary prospect. One could also argue that (secular) bear markets don’t end in panic, but rather in disgust and there seems to be plenty of disgust in the stock market to go around at the moment. At some point in the future some sort of normalcy will return to the financial markets and the question will be how you will have positioned yourself in the meantime.

The Facebook IPO may have killed off the individual investor on Wall Street.  (Blog Maverick)

And who could blame them?  (The Reformed Broker)

Why the next market flush could create a generational bottom.  (Chicago Sean)

What has happened since then? You can see below how the S&P 500 SPDR and the iShares Treasury Bond 7-10 Year ETF performed over this time period. In short, stocks crushed bonds. 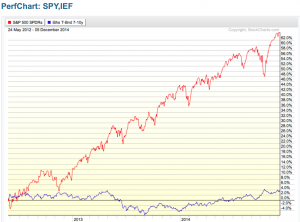 Secular bull markets typically run for a decade or longer. Unlike how it was back in 2012 it is hard to argue that the domestic stock market is cheap relative to any other asset class. The most compelling argument is that overseas stock markets provide much more value at the moment. In any event it is worth revisiting what sentiment (and valuations) were all pointing in one direction.