I thought this tweet by Benedict Evans of Andreessen Horowitz was particularly insightful:

Pretty soon saying ‘touch’ screen, ‘mobile’ internet or ‘self-driving’ cars will be like saying ‘colour’ TV. What was new becomes a given.

This idea was reflected also in a short post by Dan Frommer at Quartz who asks ‘why are we still calling them phones’ when they are used primarily as hand-held computers. The chart below shows the growing gap between data use and voice: 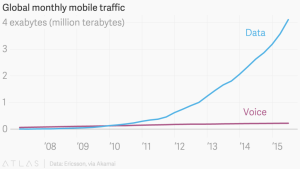 Which begs the question: what investment (or finance) term will we soon think of as antiquated? I can think of a couple of examples off the top of my head.

It may be a cliché to say that the world is changing at an increasingly accelerating rate, but it is. Along the way that means certain terms will lose their caché. Oh well, time moves on whether we like it or not.