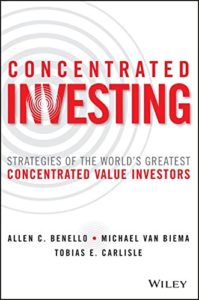 In this age of factor investing and momentum strategies a value-sensitive, concentrated portfolio seems downright old-fashioned. However this strategy is over-represented among some of the world’s best investors.

In Concentrated Investing: Strategies of the World’s Greatest Concentrated Value Investors, Tobias Carlisle and his co-authors Allen Benello and Michael van Biema take a deep dive into the topic. They had great access to some of the most successful and thoughtful investors.

I recently had the chance to ask Toby some questions about the new book. You may know Toby from his blog Greenbackd or The Acquirer’s Multiple. This is the third time I have had the opportunity to highlight one of Toby’s books. The first time was his book Quantitative Value: A Practitioner’s Guide to Automating Intelligent Investment and Eliminating Behavioral Errors co-authored with Wes Gray. The second time was in regards to Deep Value: Why Activist Investors and Other Contrarians Battle for Control of Losing Corporations. Below you can see my questions in bold. Toby’s answers follow.

AR: What do you make of the fact that these investor often ended up owning positions in the same stocks? Were these ideas so obvious or simply a convergence of philosophy?

TC: It’s extraordinary how often they bought the same stocks around the same time for the same reasons. They do talk to each other but I think it speaks more to the strict application of the philosophy described in the book. There are only so many stocks that meet the exacting criteria. When one goes on sale they are all buying hand over fist.

Writing the book I was struck by the fact that they often sold at a similar times for similar reasons too. Typically it wasn’t because a price had been reached but rather because they grew unhappy with the direction of the business. In many cases the managers started taking on too much risk. For example, several owned Freddie Mac but sold in the early- to mid-2000s, well before the full extent of Freddie Mac’s problems surfaced. The reasons were all the same: It wasn’t expensive but it was taking on too much leverage and buying increasingly low quality mortgages trying to meet the targets set by Wall Street. None foresaw the scale of the eventual cataclysm but all had enough spider sense to get out as it crept closer to ledge.

AR: Temperament is a key factor for investors running concentrated portfolios. How is it that this group of investors who all had very different backgrounds come to the same philosophy and disposition?

TC: They really do think as business owners, just as Buffett suggests. It’s often simply a convenience that the stock is traded publicly. They’re relying on long-term business results to generate returns, rather than the intrinsic value-to-price discount closing. That philosophy seems to help with the attitude toward daily price fluctuations. Several came from families that owned or managed a business, so it was ingrained from a young age. Others seemed to have figured out spontaneously.

AR: I have read about a lot of successful and famous investors and have never heard of Kristian Siem before. How did you get exposed to his story and what can you tell us about him?

TC: There’s a write-up of Siem Industries (SEMUF) on the Value Investors Club website. It begins “Siem Industries is run by Kristian Siem, who has been called the Buffett of Norway.” That alone would be compelling enough to study him but his backstory is incredible. He’s Herculean.

The oil-and-gas industry is highly cyclical. In 1979 it was deep in a bust. Drill rigs that had cost tens of millions of dollars to build were laid up in the Norwegian fjords without work. A bank foreclosed on a semi-submersible rig called the Haakon Magnus. The bank needed $22 million to clear the debt. Siem, who was 29, didn’t have the money. All he had was a business card and the free use of an office in the spare room of a small shipping company owned by his godfather.

He knew he could borrow the $22 million with the help of a Norwegian government guarantee program if he could come up with an additional $4.5 million in working capital needed to operate the rig. He cleverly figured out that the rig’s vendors-cum-unsecured creditors would have their claims wiped out if the bank sold for anything less than $22 million. They had a strong incentive to see someone operate the rig and get it worth more than the bank’s secured claim. While they were still reluctant to go along with his scheme he won them over through sheer force of personality.

The oil-and-gas industry was already turning by the time he completed the deal. Very shortly after he bought it he got a series of offers for the rig. The first came in at $28 million, finally getting to $32 million, which, after the $22 million in bank debt was repaid, represented a $10 million return on the $4.5 million in equity put up for the deal. The unsecured creditors-turned-investors were anxious to be out of Siem’s rig syndicate, and pressured him to accept. Finally, Siem agreed, telling them he’d sell it to his old boss who would see it was still crazy cheap and snap it up at a higher price than the other group had offered. His old boss was Fred Olsen, who coincidentally was recently described by Fortune magazine as a contender for the title of The Most Interesting Man in the World. Olsen understood the rig was still a steal and quickly bought the rig for $32.5 million, $500,000 more than the competing offer.

The rig still operates today, but Olsen changed its name to the Borgsten Dolphin. Siem notes that it earns around $400,000 a day, up from the $40,000 per day when Siem owned it. He estimates that Olsen has made hundreds of million dollars from it. He also notes that the cost to build a comparable deep-water rig today is $600 million, so it’s worth between $300 million and $400 million. Siem said that when his supply and support vessels work with it from time to time, “I have a little smile to myself; nostalgia.”

That’s one of five amazing stories about Siem in the book. He a tough and resourceful owner-operator and a shrewd oil-and-gas investor.

AR: You talk a great deal about how the concentrated investors in the book seem to follow the Kelly Criterion, and variations thereof, for bet sizing. Except for Ed Thorp your investors probably don’t explicitly follow the recommendation of the formula. Are they simply intuiting this rule or is something else going on here?

TC: It’s intuitive to want to take bigger bets on surer outcomes. Kelly just puts some mathematical rigor into the bet size. The real key to understanding a Kelly calculation is that it describes the upper limit of the bet size. Any fraction of Kelly is still true to the Kelly. Fractional Kelly betting at around half the suggested Kelly bet size gives most of the return and loses a lot of the volatility of Kelly–the huge swings down when big, sure bets go wrong.

Perhaps the most interesting thing about the Kelly theory is the common misapplication of it by investors. The Kelly theory was developed to be used in situations where a gambler is offered a series of bets. Any bet with a positive expected return can command some portion of the bankroll, depending on the odds offered and the gambler’s “edge,” which is the gambler’s private information about the real, underlying odds. It’s possible to have a bet that risks most of the capital if the odds are heavily in the gambler’s favor. Betting this way maximises the geometric or compound growth of the bankroll.

Investors don’t “bet” in series but in parallel–we’re offered lots of positive expectation bets all at once. If at the same time we are offered two, each of which that can be sized to more than half the portfolio capital, together they represent the chance of a total loss of capital. If both fail, we lose all the capital. Kelly never risks ruin, so this means the Kelly theory must be adjusted for portfolio investing.

Thorp discovered this idea when his son attended a Value Investing Congress in Pasadena and heard how popular the theory was with value investors. He reported its popularity to his father who was intrigued. Thorp senior wrote a mathematical paper describing the problem of creating a portfolio of positive expectation bets using Kelly theory. We discuss his findings in the book.

You can purchase any of Toby’s books, including Concentrated Investing: Strategies of the World’s Greatest Concentrated Value Investors, at Amazon.