By now you are well aware that the voters of the United Kingdom voted to exit the European Union. For many the disappointment from this result was profound. Rachel Donadio in the NYTimes wrote:

For me and others of my generation, this vote was about more than Britain’s relationship with Europe. It signaled the definitive end of the era of transnational optimism in which I came of age: the ’90s.

This post isn’t about the potential long lasting effects of Brexit. It is about markets. What was most striking about the result was the fact that the financial markets were so spectacularly wrong about the outcome. Of course there were some prominent funds that profited from the news but by and large most market participants were caught flat-footed.

The chart below of the iShares MSCI United Kingdom ETF ($EWU). Prior to the referendum markets had largely taken off the table the possibility of a ‘Leave’ vote. You can see how EWU had surged up until Thursday and then promptly gave back all of its gains and more on Friday.

Part of the surprise of the result came from the fact that most opinion polls and betting markets all pointed toward Remain winning. Michael J. Coren at Quartz writes:

Betting shops and financial markets, lauded as one of the most accurate prediction methods, consistently put the remain camp ahead and were caught by surprise. Traders woke up on Friday morning to find their confidence in the status quo badly misplaced as global stock markets and the British currency all crashed. One market-derived forecast put the odds of staying in the EU at almost 90%, even after the polls closed, says University of East Anglia researcher Chris Hanretty.

Coren notes that polls that used online and cellphone participants were far more positive towards Leave and ended up correctly forecasting the result. It wasn’t simply that the polling was wrong. It is also the case that the UK media and financial elite were surprised because they simply didn’t believe the possibility of Brexit. From The Economist:

People who found it unfathomable that Britain could vote to leave, primarily because such an event had never happened before, probably in turn succumbed to confirmation bias: placing more weight on recently released polls favouring “remain” than on the similar number of surveys backing “leave”. They may have also fallen victim to the “availability heuristic”, presuming that the EU vote was likely to resemble that of Scotland’s 2014 independence referendum (where the status quo won handily even though the polls showed a tight race) simply because that precedent occurred so recently in the same country.

So what we had here was a collectively large case of groupthink. Groupthink however is a killer for investors looking to profit off of these types of big macro events. Original thinking was lacking and only through novel thinking (or data) can investors actually generate alpha. From Adam Grant’s new book Originals:

In the investment world, you can only make money if you think different from everyone else. Bridgewater has prevented groupthink by inviting dissenting opinions from every employee in the company. When employees share independent viewpoints instead of conforming the majority, there’s a much higher chance that Bridgewater will make investment decisions no one else has considered and recognize financial trends no else has discerned. That makes it possible to be right when the rest of the market is wrong. – p. 198, Originals: How Non-Conformists Move the World, Adam Grant. 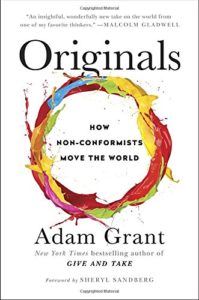 As anyone who reads Grant’s thoughtful book will see that being original is not easy.* However doing things like ‘questioning your default’ and trying to see things from the opposite perspective could have helped in this situation. One thing we have talked about in this blog has been the lack of diversity in investment organizations. This is another way in which investment managers could have had a better chance at generating new and original insights.

We are in a certain respect in uncharted territory trying to figure out where the UK and Europe go from here. What we do know is there will be plenty of opportunities for original thinkers to profit along the way.

*To be clear I have no idea how (or if) Bridgewater Associates positioned themselves ahead of the referendum.