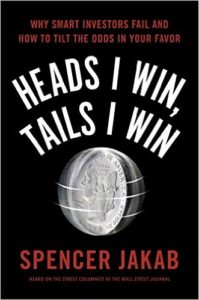 This combination of experiences gives Jakab a unique perspective on the financial markets and investing in general. Jakab uses his first book as an opportunity to speak to individual investors about evidence-based ways they can better manage their portfolio. That and he gives us some insight into his proprietary measure: the “Hungarian Grandmother Indicator.” Below you can see my questions in bold. Spencer’s answers follow.

AR: As we write we are in the midst of a Brexit-induced spike in volatility. In a chapter of the book you talk about both having some sense for market sentiment and the importance of ‘maintaining your cool.’ Can the average investor do both simultaneously?

SJ: It’s by definition very hard to be dispassionate if you’re the “average” or typical investor. The public mood has to sweep up most members of the public in order to qualify as such after all. Human nature is what it is.

My book has a lot of anecdotes that I hope will give people pause during the next mania or crash, though, and forewarned is forearmed. My concrete advice is for them to insulate their savings from bad decisions ahead of time. That could involve committing to a mechanical, passive approach to investing and or perhaps engaging someone like an advisor who thinks that way and can give them a sanity check.

AR: In the book you talk about how once you joined the bank where you were an equity analyst you instantly gained stature in the eyes of strangers. That and an anecdote about a financial television appearance underlie our need for ‘seers’ as you put it. Can we ever really shake our need for forecasts, confidently stated?

SJ: It took being in that business for me to see that the emperor has no clothes and I’m cynical by nature so this is a very tough nut to crack. People want to believe that there are gurus out there, especially when it comes to their money. Of course it’s possible to make sense and be right about many things without having an edge in security selection. One of my columns or an analyst’s report can be full of smart insights and salient facts, but those are almost always baked into the price of the stock they’re about.

I’m asked all the time what I think about the market by acquaintances or strangers who find out what I do for a living. That’s probably the case with many of your readers too. Probably eight times out of ten, though, I give them my speech about how I really don’t have any superior insights and their response is something like: “Uh huh. So what do you think about Apple at this price?”

It’s frustrating, but there’s a psychological explanation for it. A person who recognizes their limitations and is self-effacing ultimately is less influential than someone who expresses self-confidence, irrespective of the latter’s track record. Let’s not forget that most purported seers earn their living by sounding confident. Most of them are conning themselves rather than their audience, downplaying their misses and exaggerating their hits in their own minds.

AR: You have the unique experience of having worked at the highest levels both on the sell side and financial journalism. You note how investors should take the growth estimates of analysts with a ‘big grain of salt.’ What is the analogy for financial journalism?

SJ: That’s an interesting question. On the one hand, journalists don’t have the same conflicts that stymie some analysts. That, and the fact that we’re less likely to miss the forest for the trees, makes an analytical column like Heard on the Street, which I edit, and the FT Lex Column, for which I used to write, so refreshing. In terms of something like stock selection, though, I think we’re neither better nor worse than the pros who make multiples of our salaries.

One interesting criticism of financial journalists is that, when something makes the headline of a major paper or the cover of a magazine, it usually means the trend is about to reverse. There’s something to that, but keep two things in mind. First, nobody reads an article stating “nothing to see here folks.” Dramatic stories sell papers. Furthermore, the sources for alarming or exuberant stories are financial professionals that journalists interview so those articles are really a reflection of the faulty conventional wisdom of the “experts.”

AR: One area where you recommend investors deviate from low cost index funds is in the area of ‘fundamental indices.’ As smart beta goes this is a strategy with a long track record. What do you think about the explosion in smart beta ETFs and the hype surrounding them?

SJ: I think there’s a lot of substance to many products that fall under “smart beta,” but you use the right word in calling it hype. It seems to me that smart passive is becoming the new active as one company’s formula competes with another the way star managers do. Unfortunately, beta is getting smarter at a far more rapid clip than investors are getting wiser. I see the danger of people jumping from one strategy to another in a counterproductive way.

If you put your money into a fundamental index or value fund or something like that you’ll probably be pleased in the very long run but will suffer periods of underperformance. Many investors will get discouraged and abandon those strategies at precisely the wrong times, turning smart beta into a dumb investment through no fault of the product.

AR: In the book you talk about the importance of recognizing the relationship between skill and luck. In my opinion this is a fundamentally different way of viewing the world and one that gets glossed over in the financial press. How should investors re-orient how they view investment performance in light of this and problems like survivorship bias?

SJ: People see patterns where none exist and elevate (or repudiate) investing heroes like Bill Miller during and after his streak. Overwhelming evidence shows, though, that star investors are probably 97% lucky and that the remaining 3% are very hard to identify. What’s more, as you say, the overall numbers on active management are misleading because of survivorship bias.

A smart person’s stock answer to that is ‘Warren Buffett.” I don’t insist that Buffett is a fluke though because so many successful investors share traits with him. It is those traits – patience mostly, as well as their process – that sets them apart. Instead of jumping from star to star, a retail investor should focus on why that has worked in the long run and not who just got named “fund manager of the year” or whatever.

AR: You and I have had the same experience: when you tell someone you are involved in the markets you usually get a highly inappropriate question. Like what do you think of gold in here? Or do you think Twitter is going to get acquired? Did you write the book so you could tell people ‘read the book’ or is there a better way of handling these types of questions?

SJ: I wrote the book with those questions in mind, but not because I don’t want to engage people directly. Obviously I can reach a lot more people this way. I think it will have better results too. Both experts as well as ordinary people who don’t work in finance and read sample chapters said it changed their way of looking at investing. My two minute shpiel about staying the course, regular rebalancing, and keeping costs low never gets a response like that.

AR: In the book you allude to the ‘law of active management’ and the mathematical impossibility of the average investor ‘beating the market.’ Besides passing through the school of hard knocks how can investors acquire the modesty required to follow a low cost, low activity portfolio you recommend?

SJ: Probably the most surprising thing I found in doing research for the book is how unaware people are of their own historical returns other than a vague sense that they really should have more money. If people had to rate themselves from zero to 10 relative to all investors and also relative to the market, the median guess would be a 7 on both. The reality is that they’re a 5 and a 2, respectively. So modesty won’t cut it.

My approach was to appeal to their greed instead.  The title sounds like a “get rich quick” type book, which this certainly isn’t. But I’m guessing it will get their attention. Telling people that their nest egg could be twice as large or more with a few changes to their investing habits is not only true but, I hope, an attention-getter.

You can purchase Heads I Win, Tails I Win: Why Smart Investors Fail and How to Tile the Odds In Your Favor at Amazon and Portfolio/Penguin.