True, lasting and real innovations are rare in the financial services industry. Historically financial innovations have at some point come back to bite the markets (and economy). As Paul Volcker famously said:

I made a wiseacre remark that the most important financial innovation that I have seen the past 20 years is the automatic teller machine. That really helps people and prevents visits to the bank and is a real convenience.

How many other innovations can you tell me that have been as important to the individual as the automatic teller machine, which is in fact more of a mechanical innovation than a financial one?

While ATMs are pretty cool. I would argue that there are at least four major financial innovations since the 1970s that have changed the landscape for good. While listed options trading and futures on financial instruments are interesting (and both originated in Chicago). I would argue that the introduction of the retail index fund and exchange-traded fund (ETF) would also rank among the true and lasting financial innovations.

However neither the index fund or the ETF exactly took the world by storm at the outset. Then again that might very well be the sign that they were truly innovative. Morgan Housel at the Collaborative Fund has a great post up showing the vast indifference that the Wright Brothers’ first powered-flight received in the press. As Housel notes:

Things that are instantly adored are usually just slight variations over existing products. We love them because they’re familiar. The most innovative products – the ones that truly change the world – are almost never understood at first, even by really smart people.

The investment industry is, if nothing else, made up of some really smart people. Indeed one can argue that it is these “smart people” that make possible the practice of indexing. An argument against indexing is that allows for index funds to get a “free ride” off of the hard work of active investors who go out there and try to pick stocks with the best prospects. However Cliff Asness writing at Bloomberg took that idea apart:

What is left out of these complaints is that this isn’t something specific to investing or active management. For most of the goods and services we all consume, we naturally rely on existing market prices that we made no effort to determine ourselves.

There is only so much “free ridership” the capital markets can take. The question is when does the rise of indexing crowd out legitimate active management such that securities prices get out of whack? We took a crack at this idea in a post “The Bernstein Curve” where we applied the logic of the “Laffer curve” to indexing. 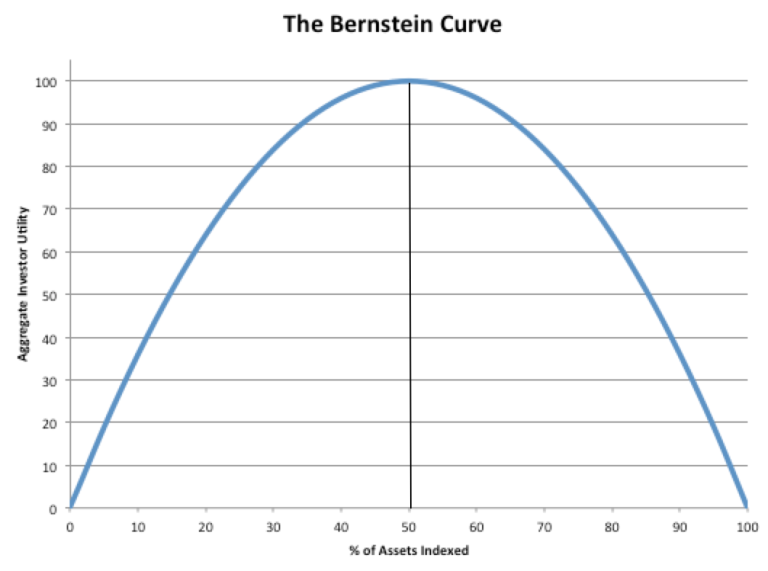 In that post we argued that 50/50 active, passive was a reasonable equilibrium. John Bogle, founder of the Vanguard Group thinks indexing can go much higher. From a recent Jason Zweig article at WSJ:

“What happens when everybody indexes?” he [Bogle] asks. “Chaos, chaos without limit. You can’t buy or sell, there is no liquidity, there is no market.”

But, he adds, that would require indexing to grow immensely from today’s levels. Probably not until passive funds are at least 90% of the market could such chaos arise, he argues.

If that’s the case, then as Larry Swedroe at ETF.com argues there is still plenty of active management around to keep prices in check. It is interesting that is still the case 40 years into the era of retail index funds.* In fact Vanguard recently celebrated the 40th anniversary of the launch of the (now) Vanguard 500 Index Fund. However not unlike the Wright Brothers the idea of retail index funds did not exactly take off. 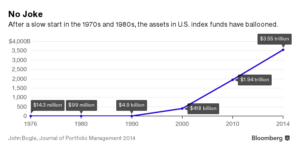 As you can see it took four years for index funds to reach almost $100 million in assets. And another ten years only brought the total up to some $5.0 billion in assets. As John Bogle says the launch of the Vanguard fund was a “complete flop.”

One of the great things about John Bogle is that he had the courage of his convictions to persevere with an idea that had a significant intellectual basis behind it. If he had listened to his competitors who dubbed the idea of index funds “Bogle’s folly” we may very well be living in a very different world.

Eric Balchunas at Bloomberg recently estimated that Vanguard has over its life (and future life) has saved investors some $1 trillion in fees and expenses. The effect of Vanguard can be most seen post-Internet bubble when equity market returns have been harder for the average investor to obtain. However you slice and dice the numbers Vanguard, and Bogle, have done a great deal to make the investing lives of investors a little bit better. Hamilton Nolan at Deadspin writes:

John Bogle has done more than any crusading socialist (in America) to take money out of the pockets of Wall Street con artists and keep money in the pockets of regular people. John Bogle founded a multi-trillion dollar investment firm and did not use it to make himself into a multi-billionaire, but instead used it to produce a good product at a fair price that saves money for everyone who uses it.

A good product at a fair price is not the mantra of the investment management industry. Holman Jenkins at the WSJ wrote in regards to his talk with Bogle:

Nonetheless, the growth of indexing is obviously unwelcome writing on the wall for Wall Street professionals and Vanguard’s profit-making competitors like Fidelity, which have never been able to give heart and soul to low-churn indexing because indexing doesn’t generate large fees for executives and shareholders of management companies.

That is why Scott Fearon at Dead Companies Walking in his article on birth and growth of the index funds warns that more turmoil is in store for the incumbent asset managers. In short, these companies either need a strategy for a low-cost world or face a rough future. Fearon writes:

(A)s this industry disruption accelerates, the earnings, and stock prices, of asset management firms will likely disappoint. Some firms—those with low cost structures, low fees on actively managed funds, and a growing number of index funds/ETFs—will take market share and survive. But others may not. The list of publicly traded money management firms is lengthy…Unless these firms adjust to the new index dominated world, their stocks could lag those very indexes for a very long time.

Just as the investment management business didn’t embrace indexing, nor did it embrace ETFs either. I would argue that ETFs have been the lighter fluid on the fire that retail index mutual funds lit. ETFs, which were for a long period of time, the exclusive province of indexing allowed ALL investors, not just those that were clients of Vanguard to take advantage of the indexing mindset. As Joanne Hill wrote at the Financial Analysts Journal:

But the other part of the success story of index strategies—their growth in ETF packaging—is not a perversion of the original concept of indexing. Rather, ETFs represent a product innovation that extends the original concept of index construction to include rules-based managed portfolios that can be bought, held, and traded like stocks. ETFs can be accessed through exchanges and held by the smallest and largest investors for the same management fee. In this sense, ETFs are often said to have democratized investing; the range of investment exposures available in ETF packaging brings to the average investor what was available only to the largest institutions 20 years ago.

Twenty years ago, the idea that you could get a globally diversified, index-centric portfolio for 0.08% a year in fees would have seemed like a fantasy. Forty years ago, nobody probably including John Bogle, thought index funds would get so popular that we would be discussing the idea of them taking over investment management. Not only does this highlight the speed in which technologies are changing our world it also underlies the fact that we really have no idea where all this is going. Who knows, maybe 100 years from now, the whole idea of investing itself, will seem like a quaint pastime.

*Prior to the 40th anniversary of the launch of the Vanguard 500 Index Fund, Sanford C. Bernstein kicked off a firestorm in the financial media (and blogosphere) with the idea that indexing was “Marxist” in that it resembles somewhat mindless central control of the economy. You read reactions from David Keohane, Matt Levine, Allistair Heath, Robin Powell and John Rekenthaler.

You can support Abnormal Returns by visiting Amazon, signing up for our daily newsletter, liking us on Facebook or following us on Yahoo Finance, Medium, StockTwits and Twitter.