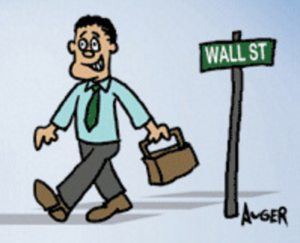 Eddy Elfenbein of Crossing Wall Street has been blogging as long as I have, which for you youngsters out there, is a really long time.* That is why I am so pleased to see all the hard work he has put into blogging and building a track record for his annual Buy List paying off in a big way.

Today the AdvisorShares Focused Equity ETF ($CWS) launched. It makes it super-simple to follow Eddy’s picks in a single investment. You can read the press release about the launch and find more details about the fund as well. I had a chance to ask Eddy some questions about the fund. You can find my questions in bold and Eddy’s answers follow.

AR: You’ve likely had other opportunities to do something the Buy List. Why now?

EE: Over the years, I’ve had many readers ask me if there’s a way of investing in our Buy List. Until now, I’ve always said no. It just reached a tipping point where my partner, AdvisorShares and I, believed that we enough interest to make a workable product.

AR: Why an ETF? What are the benefits of holding CWS versus doing it yourself with the Buy List in late December?

EE: I really like the structure of an ETF. The obvious benefit is that you’re buying just one stock instead of 20 Buy List positions. One share of each of the 20 Buy List stocks comes up to nearly $2,000. But one share of CWS will start at $25.

AR: There is a mix of large, mid and small caps on the Buy List. How are the positions in the fund going to be weighted?

EE: We’re going to try and mimic the Buy List as closely as possible. The 20 Buy List stocks start out each year equally weighted. Now that we’re nearly three-fourths of the way through this year, normal market activity has made the 20 positions unbalanced, although not by much. We’ll be equally weighted again at the start of 2017.

AR: Tell me how a fulcrum fee works and why it is the way to go with an ETF like this?

AR: What do you do if one of your companies gets acquired during the year? Replace it?

EE: Just as we’ve done in previous years with the Buy List, if a stock is bought out, then the acquirer’s stock takes its place at whatever ratio the deal is. The only exception is for an all cash deal (I think that happened once). In that case, the cash was invested in the 19 remaining positions.

AR: Are there any capacity constraints for CWS given its limit of 20-25 holdings?

EE: Not at all. Even with $500 million in assets, that gives thousands of companies to invest in without making a peep. Ask me again when we’re the size of Berkshire Hathaway.

AR: Do you think being a blogger helps or hurts in trying to generate interest in $CWS?

EE: It helps, absolutely. I love the sense of community that blogging builds. I also appreciate the feedback (and criticism!) I get from readers. Doing this for 11 years now, the blog and twitter feed have gathered a nice following so that helps make a workable product.

AR: Who is the ideal investor for $CWS?**

EE: Someone who likes money.

*I am going to be appearing on a panel with Eddy at Stocktoberfest 2016 in Coronado on October 14th.

You can support Abnormal Returns by visiting Amazon, signing up for our daily newsletter, liking us on Facebook or following us on Yahoo Finance, Medium, StockTwits and Twitter.