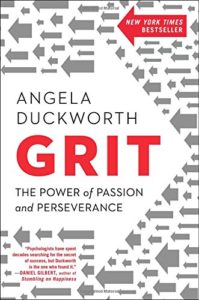 In Angela Duckworth’s Grit: The Power of Passion and Perseverance, grit is a combination of passion, perseverance and conscientiousness.* It is hard to imagine anyone achieving a meaningful personal or professional goal without some measure of grit. Not surprisingly the book’s conclusions have been hyped up.

Duckworth’s book has come under some criticism for raising grit to some elevated status despite the fact that perseverance is highly correlated with measures of conscientiousness.** However grit isn’t just perseverance. Duckworth later said:

I think the misunderstanding — or, at least, one of them — is that it’s only the perseverance part that matters. But I think that the passion piece is at least as important. I mean, if you are really, really tenacious and dogged about a goal that’s not meaningful to you, and not interesting to you — then that’s just drudgery. It’s not just determination — it’s having a direction that you care about.

“What I mean by passion is not just that you have something you care about. What I mean is that you care about that same ultimate goal in an abiding, loyal, steady way. You are not capricious….Grit is about holding the same top-level goal for a very long time.” (p. 64)

How many people do you know who have a true passion for investing and/or trading? My guess is not many. A few years ago I said that 99% of people don’t want to trade. In short, they have better things to do with their lives.

It is for this audience that the rise of zero cost ETFs and robo-advisor solutions are so profound. Services like Acorns, Betterment (among others) give investors a low-cost solution to their investing needs. Think of these solutions as freeing up time for other more meaningful endeavors. Just as Uber makes driving, for many, a choice not a necessity.

To achieve some measure of success requires grit. The vast majority of people would be more satisfied applying their passions to more relevant goals and leave the stress of trying to beat the market to those who just can’t help themselves.

*I checked Grit: The Power of Passion and Perseverance from my local library.

**See more takes on grit at The Science of Us, Scientific American, the New Yorker and The Atlantic.

You can support Abnormal Returns by visiting Amazon, signing up for our daily newsletter, liking us on Facebook or following us on Yahoo Finance, Medium, StockTwits and Twitter.
XX