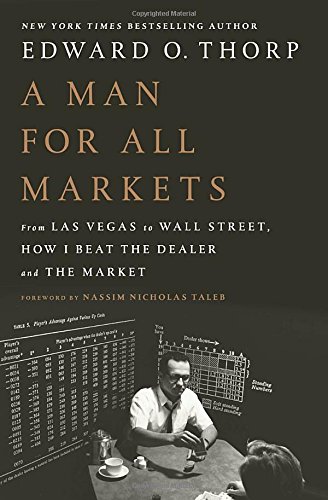 The field of finance and investments is largely bereft of memoirs by its highest profile players. Unlike fields like politics, entertainment and sports where memoirs abound, finance-types are more likely to write about their investment philosophies as opposed to their life stories.

Finance memoirists of late have been more likely to examine the dark underbelly of finance in the likes of Turney Duff’s The Buy Side: A Wall Street Trader’s Tale of Spectacular Excess or John LeFevre’s Straight to Hell: True Tales of Deviance, Debauchery and Billion-Dollar Deals. Neither of which I read. I am much more interested in the life of people like Warren Buffett, who have persisted and profited throughout their careers.

However Warren Buffett pours his energy into writing his annual Shareholder Letters as opposed to documenting his life story. There are however no shortage of authors who are willing to pour over his life for lessons in books like Buffett: The Making of an American Capitalist by Roger Lowenstein The Snowball: Warren Buffett and the Business of Life by Alice Schroeder.

On the face of things Warren Buffett and Ed Thorp would seem to have diametrically opposed approaches to investing. However in an excerpt on our site from Quantitative Value: A Practitioner’s Guide to Automating Intelligent Investment and Eliminating Behavioral Errors Wes Gray notes how the two men once met and found common ground in their approach to trying to beat the market. Thorp also documents this story in the book and notes how important it was to his career.

In another previous book excerpt Thorp talks with Jack Schwager in Hedge Fund Market Wizards about how to implement trend following strategies. So readers of Abnormal Returns shouldn’t be at all surprised that Ed Thorp’s new memoir A Man for All Markets: From Las Vegas to Wall Street, How I Beat the Dealer and the Market would be of interest.* I am not yet through the book yet but I was glad to read that Brenda Jubin at Reading the Markets found “A Man for All Markets is an inspiring memoir.”

In addition to looking at his life in the markets Thorp later on in the book examines some hot button topics in finance like excessive leverage, the power of compounding, the benefits of indexing, whether you can beat the market and looks at asset allocation and philanthropy. These topics will be interesting to investment types but Thorp first became famous for his forays in to gambling.

In a recent Planet Money episode you can hear how Thorp became interested in blackjack and eventually wrote Beat the Dealer which went on to become a huge bestseller. It should also be noted that Thorp, along with his partner in crime MIT professor Claude Shannon, were the first people to build a ‘wearable computer‘ all in the service of trying to beat the seemingly random game of roulette.

Nassim Nicholas Taleb in this foreword the book puts Thorp’s contributions to math and finance into perspective. But maybe it all boils down to what Thorp says is a key factor in being able to beat the market:

2. Be a disciplined rational investor. Follow logic and analysis rather than sales pitches, whims or emotion. Assume you may have an edge only when you can make a rational affirmative case that withstands your attempts to tear it down. Don’t gamble unless you are highly confident you have the edge. As Buffett says, “only swing at the fat pitches.” [pp. 299-300]

*I received a complimentary copy of A Man for All Markets: From Las Vegas to Wall Street, How I Beat the Dealer and the Market from the author and will receive a small fee for all books purchased through Amazon.com.