Jim Cramer’s name doesn’t come up very often on this site. However a recent post by Cramer about ETFs garnered some attention and is worth addressing further. Cramer noted the decline in interest in stockpicking due to the rise of sector ETFs. From the article on CNBC:

On a larger scale, however, Cramer said that ETFs have the power to distort stock valuations too dramatically for his liking.

“At the end of the day, I’m against ETFs because they often create enormous distortions that can obliterate even the best of stocks,” Cramer said. “You have to accept a lot more risk if you own a stock that’s particularly hostage [to] a given ETF.”

Todd Rosenbluth writing at ETF.com took exception with Cramer on a number of fronts including the characterization of the ETF industry itself:

Cramer attributed the rise in the number of ETFs to the financial services industry looking for a new way to make money; CFRA attributes the rise in assets in ETFs to investors tiring of underperforming active managers…While low fees play a role in these decisions, CFRA thinks that continued struggles by active managers to keep up with the index has resulted in more investors being comfortable with consistently average returns.

Joel Dickson writing at ETFdb.com represents some middle ground on the topic  of ETFs. Dickson writes:

Are ETFs perfect? No. There are probably too many of them. But the same could be said of traditional mutual funds, even index funds. Do all offer sound and durable investment strategies? Probably not. Neither do mutual funds…ETFs, like whiskey, require moderation. Moderation in use and moderation in the views pertaining to them.

It’s hard to believe but I have been writing about ETFs since the outset of this blog back in 2005. One year later in 2006 I characterized ETFs as a “useful tool” and wrote:

Feinberg is indeed correct in calling ETFs a “wonderful tool.” However the well-publicized advantages of ETFs can become a disadvantage in the wrong hands if used incorrectly. Unfortunately the ETF industry is continuing to populate the universe of ETFs with ever more complex and narrowly-based funds. Choice is indeed great, but as costs and complexity rise, the chance (and costs) of making a wrong decision also rise.

Sometimes critics of ETFs believe that some how ETFs somehow exist in a vacuum. By that I mean they don’t accept that the growth in, and popularity of ETFs, is somehow made-up. The fact is that for every successful ETF, three things have to happen.*

There are no shortage of ETFs that have passed the first two hurdles. The challenge is achieving the third. According to Ron Rowland at Invest With an Edge there have been some 700 ETF closures over time. In some cases a fund never gets past the second stage. Recently the SEC failed to approve an application for a Bitcoin ETF.

Sector ETFs, which Cramer seems to most object to, exist because all three of the above criteria have been met. Sector funds are not in fact an invention of the ETF industry. Sector-focused mutual funds existed, see Fidelity’s line-up, long before the invention of the ETF. So it isn’t the existence of the sector fund that bugs critics, it is their popularity.

That is not to say that ETFs are in any way, shape or form perfect. The way ETFs trade has put a great deal a great deal of pressure on the last half hour of trading. A few days ago a glitch on the NYSE’s Arca platform made a mess of end-of-day pricing. During periods of market stress ETFs have come under criticism for their inconsistent trading. Given the number of ETFs and their structure there will always be room for error in their trading. 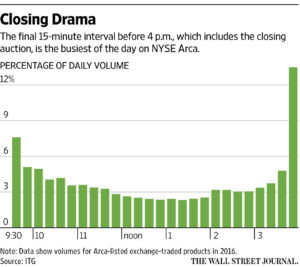 Another valid criticism of ETFs is the existence of funds that in the hands of novice or amateur traders could do them damage. Inverse ETFs are a prime example of this. Jared Dillian writing at Bloomberg View takes to task both the ETF industry and the SEC for the existence of inverse ETFs that if held in perpetuity would eventually lose all of their value. Dillian writes:

The reality is that leveraged ETFs are super complicated financial instruments –certainly more so than futures, which are linear and plain vanilla because all you have to understand is margining and spreads. In a way, they’re more complicated than options. There’s plenty of math in options, but a closed-form equation describes them.

Dillian notes that since 261 leveraged ETFs with $41 billion in AUM exist shows that they are not being used as their sponsors say that should be. This goes to show that the world of ETFs isn’t perfect. The SEC likely made a mistake by approving leveraged ETFs in their current form but was on point when it approved the sector ETF. There is no shortage of silly themed, sector ETFs but that does not call into question their existence in the first place.

ETFs are like, the financial blogosphere itself, an “imperfect meritocracy.” By and large the cream rises to the top. There is more than enough criticism to go around for all three constituents in ETF-land: sponsors, the SEC and investors alike. In light of all that ETFs have done in reducing fees and increasing access for investors it seems silly to say you are “against ETFs.”

*I recognize this simplifies the process greatly, but captures the main constituencies.