For increasing numbers of people around the world, in nearly every place where digital life has acquired a real and lasting presence, analog is now a conscious choice, requiring a greater cost, both materially and in terms of our time and mental capacity, then the digital default. And yet people are increasing elect it. – David Sax, The Revenge of Analog, p. 238

It seems like a cliche to say we are living in the digital age. For example you are reading this on a computer or other digital device. Of late there has been a big debate about the degree to which robots, or more generally automation, is going to eliminate both blue-collar and white-collar jobs. 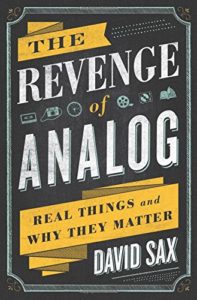 Therefore a book talking about the importance of analog, or real, tangible things, could feel like an exercise in contrarianism. Fortunately that is not the case with David Sax’s The Revenge of Analog: Real Things and Why They Matter.* Rather it is a thoughtful look at the many ways in which analog has not been eliminated from the world but in many ways is still thriving.

In the book Sax discusses both the “revenge of analog things” like vinyl records, hardback books and board games. As well as the “revenge of analog ideas” in areas like print, school and work. For me the biggest takeaway wasn’t about how hipster record stores are popping up around the country. What resonated with me was the idea that we are “analog machines.” We do not interact with the world through digital feeds but rather through our analog senses, brain and emotions.

In the book Sax quotes Dan Shapiro of Glowforge at length about this very idea. Sax quotes Shapiro:

There’s no rational debate about this. The world is analog, and digital is always a representation…Digital is not reality..it’s the most convenient way with we have that we can approximate reality. Moving from analog to digital is always a process of throwing things away. And what we can get away with. Analog is always the source, always the truth. Reality is analog. Digital is the best we can do with the tools of the day. It’s funny how often people forget that.

Not surprisingly I also found an investment takeaway from the book as well. Sax talks about the different realities of investing in analog businesses. He notes how the digital, dominant venture capital model is to invest in a portfolio of digital businesses with the hope that a handful of them will succeed and scale. However that is a risky, and potentially flawed model. Sax writes:

Investing in analog business is along, patient game of hitting singles and doubles to rack up runs. Investing in digital ones is waiting for the long ball. You might miss ninety-nine pitches, but none of that matters if you whack the hundredth out of the park. And the truth is that most technology startups will fail and be left with nothing to show at the end of the day, because they hold few concrete assets. A housing development that goes bust will has land that can be sold or held until it appreciate in value If you investing a technology company it goes under the most you can hope is to recover some of its office furniture. There is no long-term value in code. It is not an asset. David Sax, The Revenge of Analog, p. 170

Saying there is no value in code may be an exaggeration but it gets at the point that code, like any other capital assets, depreciates over time. Code requires upkeep, tweaking and at some times it needs to be translated into an entirely different programming language to stay up-to-date.

If nothing else, Sax’s book reminds us that we live in an analog world. It is a good reminder that digital can only take us so far.

*I read a library hardback copy of The Revenge of Analog: Real Things and Why They Matter. Talk about analog…

**Sax also did a podcast with Brett McKay at the Art of Manliness where they discuss the major themes of the book. Ironically Sax recently wrote a short post at Bloomberg talking about how he’s “got a case of podcast fatigue.”