For awhile there the biggest meme in the investment world was comparing Apple’s ($AAPL) market cap to various (usually) stupid stuff. Josh Brown at the Reformed Broker went so far as to start a Tumblr page called “Things Apple is Worth More Than.” Needless to say most of these comparisons made the fundamental mistake of comparing stock with a flow.

Tripp Mickle in the WSJ today has an article examining the growing hoard of cash Apple has on its balance sheet. You can see the growth in the cash, most of it overseas, in the graphic below. Mickle quotes Jennifer Blouin, an accounting professor at University of Pennsylvania’s Wharton School.

“I have never seen a company in this kind of extreme position, barring a winding-down,” she said. “Apple’s a cash box right now.” 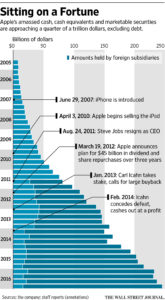 That got me to thinking, where would Apple’s cash hoard rank among the world’s largest money managers? In the October 31, 2016 edition of Pensions & Investments listed the 500 largest money mangers. Apple’s $250 billion in cash (and equivalents) would rank them 69th on the list, assuming no change in AUM. That is right between Zurich Financial Services and Pioneer Global Asset Management. Blackrock ($BLK) sits atop the list with $4.645 trillion, with a T, in assets under management.

It is reported that Apple is preparing an Apple Pay-based competitor to Venmo. Which is all well and good but Apple is already a big player in the financial services industry. Just don’t look for an Apple fund ad on CNBC. Congrats, Tim Cook!