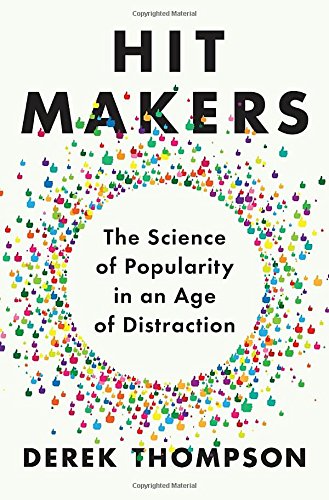 The great 20th century industrial designer Raymond Loewy had a huge impact on design in America. Derek Thompson in his book Hit Makers: The Science of Popularity in an Age of Distraction traces Loewy’s influence on design from a lowly mimeograph machine all the way to Skylab. In short, much of the world around us springs from the creativity and work of Loewy. Loewy’s influence and success can in part be traced to his understanding of consumer psychology. His theory of MAYA or ‘Most Advanced Yet Acceptable’ helps explain why some innovations take hold and others fall by the wayside. Thompson writes:

His MAYA theory-Most Advanced Yet Acceptable-spoke to the tension between people interest in being surprised and feeling comforted. “The consumer is influenced in his choice of styling by two opposing factors: 1a) attraction to the new and 1b) resistance to the unfamiliar,” he wrote. “When resistance to the unfamiliar reaches the threshold of a shock-zone and resistance to buying sets in the design in question has reached its MAYA stage: Most Advanced Yet Acceptable.”

Loewy understood that attention doesn’t just pull in one direction Instead, it is a tug-of-war between the opposing forces of neophilia versus neophobia, the love of the new versus the preference for the old; people’s need for stimulation versus their preference for what is understandable. A hit is new wine aged in old oak, or a stranger who somehow feels like a friend- a familiar surprise. (p. 56, Hit Makers, Thompson)

This theory of MAYA struck me as having relevance to the evolution of smart beta in the ETF marketplace. Academics have been in search of market anomalies pretty much since the formulation of the CAPM. The timeline below shows some highlights from academia that helped define smart beta. However it really wasn’t until the origin of the ETF that smart beta became a household name. 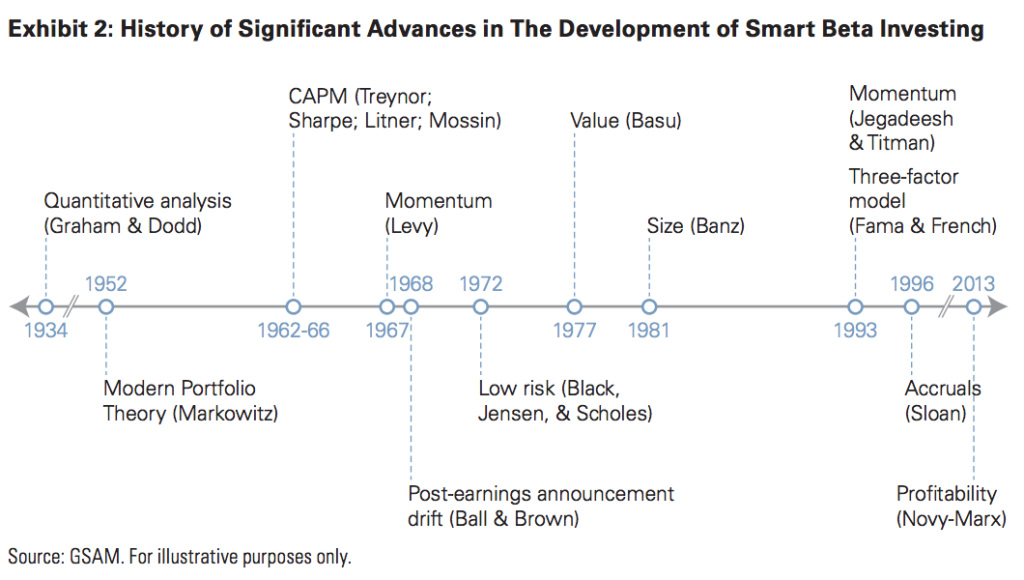 Eric Balchunas at Bloomberg shows how the birth of the ETF industry was a bit of a historical fluke. The first ETF, the SPDR S&P 500 Trust ($SPY), launched in 1993, emerged due to an SEC report reviewing the stock market crash of 1987. The first growth and value ETFs came out in 2000. The first dividend-focused ETF came out in 2003. Today, per ETF.com, there are some 889 smart beta or “rules-based strategies that aim to deliver better risk-adjusted returns than traditional market-cap-weighted indexes.”

You can see a pattern here. The time between launches between new fund types narrowed. Equal-weighted, low volatility, momentum ETFs followed. The ETF industry grew and investors became more comfortable with the ETF format and the use of non-cap weighted indices. In short, the ‘most advanced yet acceptable’ strategy has rapidly shifted over time. Today the ETF marketplace is filled with multi-factor strategy ETFs that look very little like the original S&P 500 ETF.

In Hit Makers, Thompson notes how “choices, economics and marketing are always shaping tastes.” He notes how back in 1918 when Henry Ford’s Model T was rolling off the assembly lines in black, and only black, the panoply of auto designs and colors we have today would be entirely unfathomable. The same could be said for ETFs. 25 years ago when the SPDR S&P 500 ETF launched the idea that the global ETF industry would have $4 trillion in assets and the US alone would have 2000 unique ETFs would seem absurd. But that is where we are today.

Those ETFs that were MAYA survived, thrived and spawned further innovations. The rate of ETF launches at this point in time is remarkable. Even today some ETFs, like the Winkelvoss Bitcoin Trust, go too far in the eyes of regulators, ergo ‘not acceptable.’ We still have a long way to go to get enough data to say which of these smart beta factors are real and which are transitory. What we can be sure of that further innovations in the ETF space are going to have to have to have a discussion with MAYA first.

Ben Carlson at A Wealth of Common Sense on how consumerism affects the mutual fund industry.

Reviews of Hit Makers from The Guardian and the FT.

Podcasts with Derek Thompson at Recode and Masters in Business.