I loved this Jeff Bezos quote (via CNBC) when I put it in the linkfest last week:

“One of the first rules of business is complaining is not a strategy. You have to work with the world as you find it, not as you would have it be.”

Admittedly sometimes complaining works. More than a few people have jumped on Twitter to complain about a missed connection or cable outage. Oftentimes a business is started by someone who is trying solve a problem they have with the hope that other people are need of that solution as well.

The quote seems a good fit for Bezos who, to me, always seemed like a “happy warrior.” You don’t build one of the most valuable (and influential) companies in the world, Amazon ($AMZN), without having some inherent bias towards optimism. A look at the path that Bezos and Amazon took shows a number of tough times and detours along the way. A bias toward optimism undoubtedly helped weather the tough times.

Research shows that teams that focus on positive comments tend to be the higher performing teams. You can imagine being a team where a cascade of ‘negativity bias’ has taken over. However learned optimism need not be mindless. Tony Schwartz writing at NYTimes writes:

“We need to have teams within organizations that are able to tap into the liberating and creative power of positivity,” Mr. Losada has written. The notion is not to become an uncritical Pollyanna – but instead to practice “realistic optimism.” That means telling yourself the most hopeful and empowering story possible about any given situation without denying or minimizing the facts.

Brett McKay at the Art of Manliness has a post up talking about why negativity is “boring” and “contagious.” He gives some good advice on combating negativity. The point being that everything in good time. He writes:

Just because it’s ill-advised to share a laundry list of what’s going wrong in your life with someone you’ve just met, doesn’t mean you should never share a complaint or critical comment during one’s first and subsequent encounters. Relentless, Pollyanna-ish positivity can read as fake and be just as off-putting as excessive negativity. Rather, the proper mix of negative, positive, and neutral comments to offer is a matter of order and balance.

“Order and balance” seems like great advice to anyone discussing the financial markets. Unfortunately the financial media loves to focus on perma-bulls (Pollyanas) and perma-bears (Nags). The financials are never just one thing. There is always a mix of positive and negative developments. You can choose to emphasize what you like but putting these thoughts into the proper ‘order and balance’ is the key to being a realistic and helpful advisor.

This profile of noted short-seller Marc Cohodes in Bloomberg is a great example of traversing the road between negativity and positivity. You would think that a short-seller would be a bit of a buzzkill. But Cohodes comes off in the piece, and in this great discussion with George Pearkes on the Bespokecast, as a happy warrior, not unlike Jeff Bezos.

Cohodes isn’t focused on trying to catch small moves down in any number of stocks. In the podcast he states that he doesn’t really have an opinion on the Teslas and Amazons of the world. He is focused on companies that do not have a reason for continuing to exist be it through fraud or a broken business model. In the Bloomberg piece Cohodes said:

“Legitimate companies don’t know who the f— I am. And they don’t care. The bad guys? They know. And they do care.” 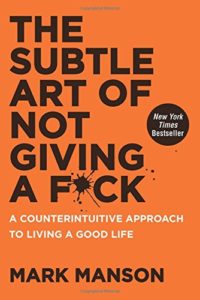 Cohodes clearly doesn’t care what other people think. One of the reasons why negativity can be so powerful is that we give a f— about too many of the wrong things. Mark Manson blogger and author of The Subtle Art of Not Giving a F*ck: A Counterintuitive Approach to Living a Good Life makes this very point.  From his blog:

Indeed, the ability to reserve our fucks for only the most fuckworthy of situations would surely make life a hell of a lot easier. Failure would be less terrifying. Rejection less painful. Unpleasant necessities more pleasant and the unsavory shit sandwiches a little bit more savory. I mean, if we could only give a few less fucks, or a few more consciously-directed fucks, then life would feel pretty fucking easy…

Developing the ability to control and manage the fucks you give is the essence of strength and integrity. We must craft and hone our lack of fuckery over the course of years and decades. Like a fine wine, our fucks must age into a fine vintage, only uncorked and given on the most special fucking occasions.

The fact is that nobody else cares about your problems. Airing your dirty laundry in public is off-putting. Call it what you will: learned optimism, realistic optimism, whatever. Projecting a positive attitude works. One need only look at Warren Buffett. It is likely not a coincidence that Buffett’s inherent optimism shines through. As Bill and Melinda Gates recently wrote: “Warren is the most upbeat, optimistic person we know.”

You don’t need to be the most optimistic person in the world, like Warren Buffett. Self-awareness, realistic optimism and sense for knowing when to give a f— and when not to will take you a long way. Warren Buffett’s nearly life-long business partner may have said it best:

“Never, ever tell anyone about your problems, 90% of the people really don’t care. The other 10% are glad you have them.” – Charlie Munger