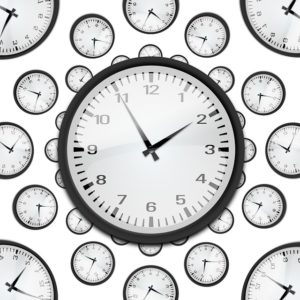 In a recent post I discussed the importance of not wasting time “watching the stock market.” In conclusion I wrote:

For most people, maximizing your potential, and portfolio, will not come from watching tick-by-tick data on financial television.

It is a horrible cliche, but one thing we cannot make more of is time. That is why I found recent research on our spending preferences fascinating. Jenna Gallegos in the Washington Post wrote:

According to a study published Monday in the journal PNAS, people who buy time by paying someone to complete household tasks are more satisfied with life. And it’s not just wealthy people. Across a range of incomes, careers and countries, timesaving purchases were correlated with less time-related stress and more positive feelings. Yet the researchers’ surveys showed that very few individuals think to spend money in this way.

Part of the problem is that time, and our appreciation of it, is not concrete. In the above study individuals were far more likely to spend an amount of cash on something concrete as opposed to something that saved time. Once again showing that us humans are at best, imperfect happiness maximizers. From the Washington Post:

“People are notoriously bad at making decisions that will make them happier,” Whillans [Ashley] said. She suspects the abstract nature of time may be to blame. “We always think we’re going to have more time tomorrow than we do right now,” she said, so we’re hesitant to trade money, which is concrete and measurable, for time, which is much more uncertain.

As consumers were are often told that a new (and better) item will enhance our life satisfaction. The new car, the bigger house, all of these things at the time seem like no-brainers. In retrospect they simply reflect time spent on the hedonic treadmill. Our happiness, while briefly elevated after a purchase, returns back to prior levels. All the while the amount of money in our bank accounts is now lower.

So before jumping on the hedonic treadmill think about what life would look life if your fixed costs, home and car, were lower than they are now? Freeing yourself up from these ongoing cash costs would allow you to do what? Buy more time!

James Osborne at Bason Asset Management has a really personal and thoughtful post up discussing this very issue. Despite owning a perfectly respectable house, Osborne sometimes feels the social pressure to step up his spending. He writes:

I like that we live well within our means. It brings me immeasurable happiness, quite frankly. But there is a lingering social pressure. A fear of a stigma that occasionally whispers from some deep recess in my mind…I feel some unspoken social pressure to consider a “nicer” house. A newer house. A bigger house. Vaulted ceilings, big bathrooms, big closets, all of the accouterments that prove that I’ve made it.

There are two issues at play. The first is that society today pushes us all in the direction of spending on more, better, faster and shinier. One could argue that this is the nature of a capitalist, consumer-based society. Part of this is dictated by the pace of technology. The current iPhone 7 is far cry from the original iPhone from ten years ago. Some have argued that what the smartphone has wrought is not altogether positive. At some point though technology has a way of becoming a necessity in our lives. For example, one can imagine a day where it would against the law to sell a car that did not have autonomous driving/safety capabilities.

The second point is about the need to be more intentional about our spending. When we buy that new, new thing we rarely consider the opportunity costs involved. Spending money on something intangible, like more time, or choosing not to spend money on the latest and greatest will have the bigger impact on our happiness. Osborne says it really well in his conclusion:

We love our home, and our lifestyle. We do things, and spend money on things, that make us happy. I try hard to be intentional about that, and we’re doing okay there. Maybe, just maybe, the bigger-shinier-stainlessier (that’s right) pursuit of the American Dream isn’t the key to happiness for everyone.

Our lives are the sum of all of the decisions we make. Being intentional in our spending decisions and choosing on the margin to buy ourselves more time are likely to make our lives better, fuller and richer.