Gary Mishuris at Behavioral Value Investor had a popular post up this week talking about five characteristics of great investors. Many of which you would recognize like temperament and patience. In conclusion he emphasized the importance of humility as well. Mishuris writes:

The best investors stay humble – always thirsting to learn and improve as well as accepting that they are fallible and can make mistakes. This helps them to be on guard against the traps of complacency and overconfidence. Some view this posture as inconsistent with confidence in one’s abilities…Believe me, the people I admire most as investors have rejected this false dichotomy, and are able to balance humility with confidence and competence in a way that allows them to continue to improve for many years.

One of the most appealing aspects of investing as a profession (or avocation) is that you can do it your entire life. A prime example of this is Warren Buffett who celebrated his 87th birthday this week. Buffett is widely known as one of the world’s richest men but he did not become a billionaire until well after his 50th birthday. The point is that Buffett compounded both his knowledge, experience and wealth over time. We have seen late in his career a willingness to change direction including hiring two managers, Todd Combs and Ted Wechsler, to assist in managing Berkshire portfolio. 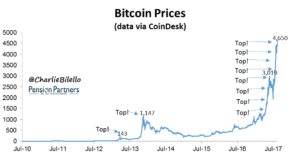 A lack of humility flies in the face of what markets can and will do on a daily basis. Before this year very few people had even heard of Bitcoin ($BTC.X). At present Bitcoin has a market cap in excess of Netflix ($NFLX) or Paypal ($PYPL). The point being is that stuff happens. Charlie Bilello at Pension Partners had a great post up this week showing a whole series of charts of things that, according to experts, never should have happened. Bilello writes:

It’s really easy to drop your guard after a series of successes in the market. When we drop our guard (and humility) complacency and overconfidence soon follow. Eight-plus into the recovery from the bottom of one of the worst bear markets in history it would be easy to get complacent about things. A peek at some extreme charts should reminds us that the unthinkable can happen in markets, often when you stop thinking it can’t.