You are reading this blog post in part because of the work Claude Shannon did during his long career. Shannon is rightfully called the father of information theory. Last year, 2016, marked the centenary of his birth. It is difficult to overstate the importance of his work. James Gleick author of The Information: A History, A Theory a Flood in a New Yorker piece stated:

“Einstein looms large, and rightly so. But we’re not living in the relativity age, we’re living in the information age. It’s Shannon whose fingerprints are on every electronic device we own, every computer screen we gaze into, every means of digital communication. He’s one of these people who so transform the world that, after the transformation, the old world is forgotten.” 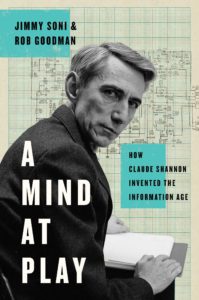 It is fitting that Shannon is subject of a new biography by Jimmy Soni and Rob Goodman, A Mind at Play: How Claude Shannon Invented the Information Age. They carefully trace not only Shannon’s academic work but show his many interests help make him the man he was to become. Given Shannon’s work on information theory it should not be altogether surprising that he touched upon the topic of investing as well.

Shannon, more specifically his wife Betty, became interested in the stock market. Shannon by dint of his reputation and position was able to acquire early stakes in some leading companies. From A Mind at Play:

Asked if he was lucky in life, Shannon answered, “Far beyond any reasonable expectations.” By his own admission , Shannon had been fortunate in his timing, and privileged in knowing certain company founders and securing early investments. The bulk of his wealth was concentrated in Teledyne, Motorola and HP stocks; after getting in on the ground floor, the smartest thing Shannon did was hold on. (p. 242)

That isn’t to say that Shannon didn’t also think about other ways to make money in the stock market. Shannon was quick to point out that there was not some grand unifying theory to explain the stock market. This was especially the case with technical analysis. From A Mind at Play:

He and his wife were, in his own words, “fundamentalists, not technicians.” The Shannons had toyed with technical analysis and they found it wanting. As Shannon himself put it, “I think that the technicians who work so much with price charts, with ‘head and shoulders formulations’ and ‘plunging necklines’ are working with what I would call a very noise reproduction of the important data.’ (p. 241)

Said another way Shannon (and his wife) were fundamental analysts at heart. A quote from Shannon from the book:

A lot of people look at the stock price, when they should be looking at the basic company and its earnings. There are many problems concerned with the prediction of stochastic processes, for example the earnings of companies…My general feeling is that it is easier to choose companies which are going to succeed, than to predict short term variations, things which last only weeks or months, which they worry about on Wall Street Week.  There is a lot more randomness there and things happen which you cannot predict, which cause people to sell or buy a lot of stock. (p. 241)

Due in part to Shannon’s work investors today have access to infinitely more data about companies and the financial markets today than when Shannon was in the prime of his investing years.* It would interesting to see if Shannon would have found common cause with today’s quants like those at Renaissance Technologies. That being said a quick look at something like the Forbes 400 list would show you people who shared traits with Shannon:

Claude Shannon’s life was about a whole lot more than getting rich and the stock market. Indeed there is an argument in the book about someone seeing large, uncashed checks on Shannon’s desk. Clearly, he was thinking about a whole lot more. That being said it is interesting to note that when he did think about the stock market his actions coincided with sound, long-term wealth generation principles.

*It should also be noted that Shannon plays a cameo role in the life of another genius Ed Thorp author of A Man for All Markets: From Las Vegas to Wall Street, How I Beat the Dealer and the Market. While at MIT Thorpe and Shannon created a device to predict the relative location of a roulette ball on the wheel. Thorp and Shannon created a working model but in the end decided the upside of using such a device in mob-run casinos of the 1960s was not worth the risk.

*See also this essay on Shannon by Goodman and Soni at Aeon.

I received a review copy of A Mind at Play: How Claude Shannon Invented the Information Age from the publisher.