Ulysses and the Sirens by J. W. Waterhouse

The term the “siren’s song, i.e. an alluring utterance or appeal; especially: one that is seductive or deceptive” has come into common usage via the Odyssey. From Wikipedia:

Odysseus was curious as to what the Sirens sang to him, and so, on the advice of Circe, he had all of his sailors plug their ears with beeswax and tie him to the mast. He ordered his men to leave him tied tightly to the mast, no matter how much he would beg. When he heard their beautiful song, he ordered the sailors to untie him but they bound him tighter. When they had passed out of earshot, Odysseus demonstrated with his frowns to be released.

The world of investment management is beset by so-called siren’s songs. There is always a new, new thing that is especially “appealing” that more often than not ends up being “seductive or deceptive.” It is therefore surprising that investors, both institutional and individual, don’t take note of Odysseus’ strategy and metaphorically ‘tie themselves to the mast’ when it comes to investing.

This idea of having an enforceable commitment to an investment is already at play in the world of alternative investments. Whether we are discussing hedge funds, private equity or venture capital there are very real constraints keeping investors exiting their commitments early. In the case of hedge funds, the commitment device is a lock-up, i.e. a contractual constraint. In the case of private equity and venture capital, the commitment device is economic in nature. These funds can have decade-long lives which include periods of cash outflows (investments) and follow-on periods of cash inflows (returns). This phenomenon is known as the J-curve.

It is possible to exit a private equity or venture capital fund commitment early. However, the secondary market for these type of investments is itself illiquid and often requires the seller to sell their investment at a discount. Many endowment funds found themselves in this very position when they discovered after the global financial crisis that their portfolios to be too illiquid and overweighted in alternative assets. 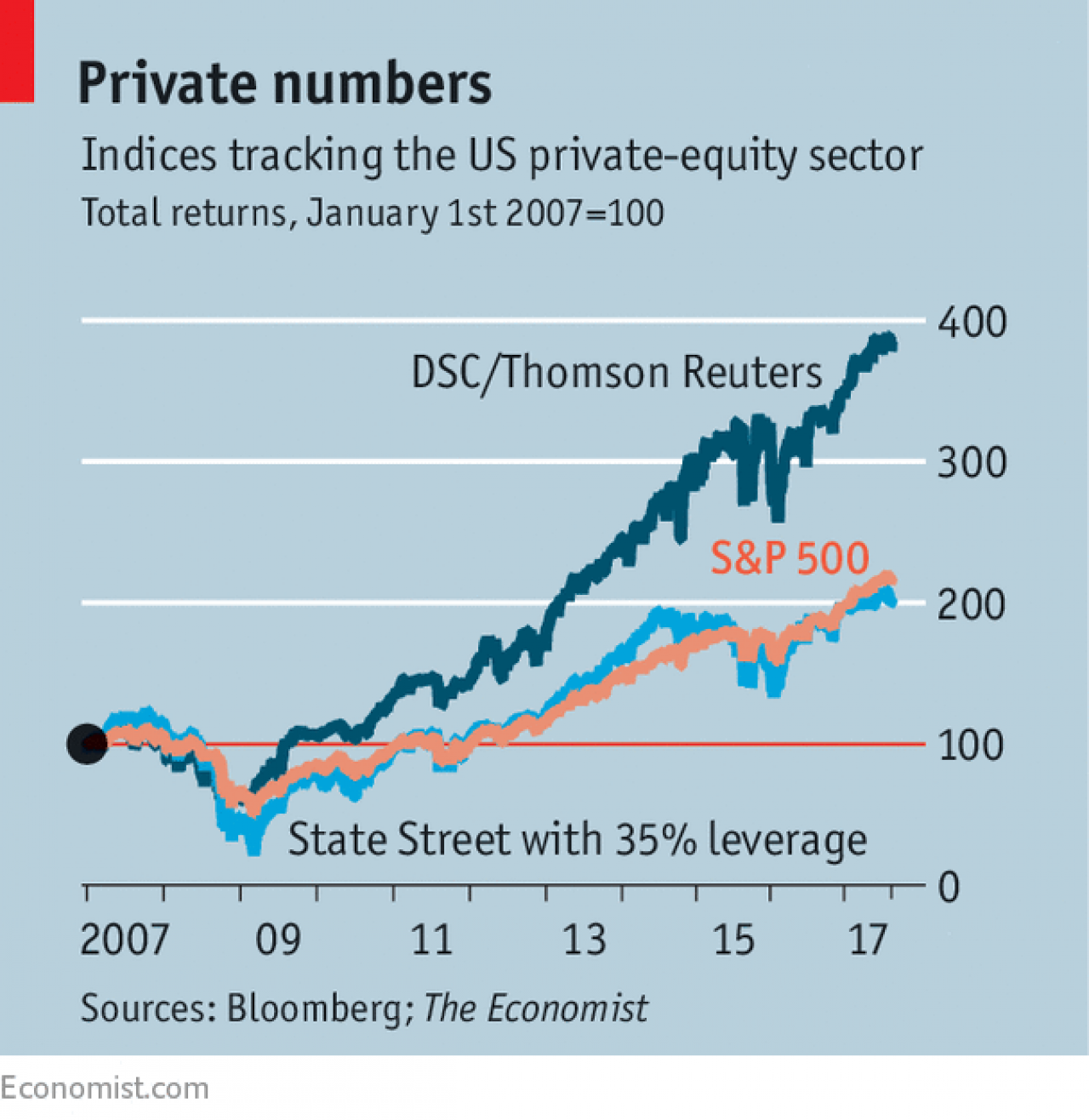 The Economist recently reported on the growing interest in investable, replicable indices that attempt to track the performance of the private equity industry. From the article:

The performance, particularly of the DSC Thomson Reuters index, seems alluring, even over the long term (both indices have been back-calculated for a number of years—see chart). Of course, an individual private-equity fund may well do much better. But such funds have their downsides: they often require investors to lock up their money for a decade or more and they charge sky-high fees.

The question isn’t whether the researchers have done their calculations and backtests correctly. The point is that using highly liquid instruments to replicate the returns from a highly illiquid asset class misses the point. Illiquidity, in the case of private equity, is a feature, not a bug. Meb Faber in a recent podcast said:

“Private equity one of its biggest benefits is…One of the biggest benefits is you can’t sell, often. If you are minority owner you are in it for five or ten years minimum…A lot of people spend so more time doing homework on that business, just like buying a house. A lot people aren’t flipping houses every year. Second, they can’t sell at the wrong time when they are forced to.” 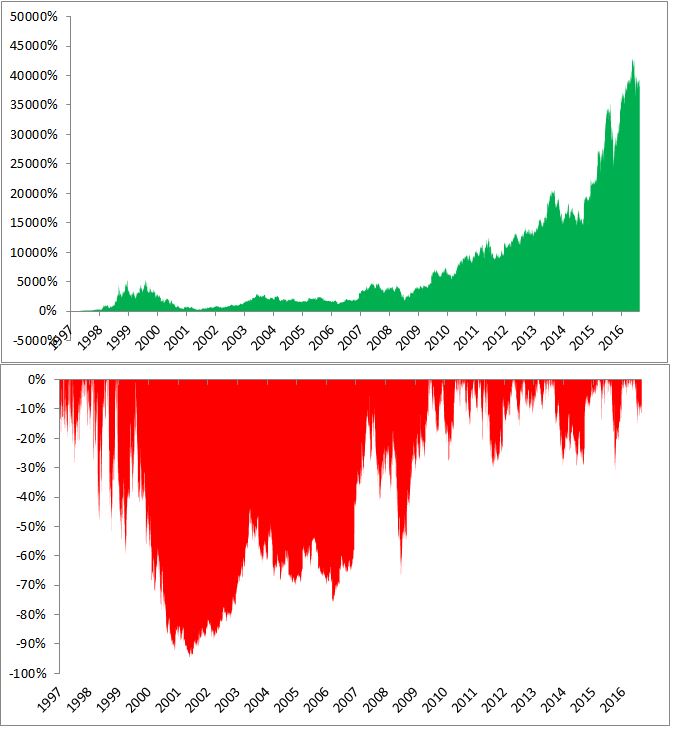 This issue of forced selling, or more likely, panic-induced selling isn’t limited to illiquid assets. It is on display in the public markets as well. A common trope in the financial media goes something like this…If you had invested $100 dollars in Amazon at its IPO it would be worth [insert really big number here] dollars today. These calculations usually ignore the time period involved and/or a relevant benchmark. However, those aren’t the biggest sins. The biggest sin in this kind of statement ignores the large (and frequent) drawdowns investors would have experienced over time holding Amazon or any other long-term winning stock. Michael Batnick at the Irrelevant Investor shows just how brave an investor would have been to hold Amazon over the long-run.

This argument in favor of illiquid assets isn’t based on there being some sort of priced illiquidity premium. The fact is that alternative assets are exposed to many, if not all the same risk factors, that publicly traded securities are exposed. Our intuition would be that there is a positive relationship between illiquidity and returns. The academic research on the topic is mixed. Instead, the argument we are making is that this is a straight-up behavioral issue. Investors who lock their money up in a private equity fund are more likely to fully realize the returns from their investment than an investor in a liquid, private equity replication program.

Granted investors in a private equity fund are going to pay higher fees than in a replication strategy. Our argument is that the risk of poor investor behavior is higher in the case of a liquid alternative which (roughly) negate the cost differential. Due to overconfidence, nearly every investor thinks they are adept at making manager changes. The evidence is squarely against investors. Joachim Klement in Enterprising Investor writes:

Doing nothing and sticking to a selected fund for the long term — or just selecting funds at random and then sticking to them — can be a significant source of alpha in the long run. Of course, this requires something that many investors find very difficult to implement: patience and discipline.

Wes Gray at Alpha Architect goes even further. He argues that even the best investment strategy imaginable, i.e. one designed with a look ahead bias, i.e. already realized data, wouldn’t prevent a manager from getting fired due to underperformance. Institutional investors are notorious for their inability to ride out periods of manager underperformance. Gray writes:

If God is omnipotent, could he create a long-term active investment strategy fund that was so good that he could never get fired?

The answer is striking: God would get fired.

This ridiculous result highlights the mismatch between what investors say they want: long term outperformance with what they really want: no short-term underperformance. In this light, investors who truly want to earn the potential outperformance from private equity need to lash themselves to the mast a la Odysseus. One can imagine a hybrid structure, what Meb Faber calls a ‘forever fund,’ where investors agree to tie their money over the long run with the penalty for withdrawals declining over time.

Any type of structure like that is going to require some expensive and careful legal work. Because when the going gets tough, and at some point it will, investors are going to use their resources to try and break the structure in order to get their cash back. That is simply what we do. We panic. Investors in private equity likely panic all the time as well. Fortunately, their investments are structured such that panic is really difficult to do.

Odysseus made plenty of mistakes on his way home to Ithaca. Tying himself to the mast so he could listen to the Sirens’ song, and not crash into the rocks along the way, wasn’t one of them.